Home Apprenticeships Apprentice of the Year — five years on 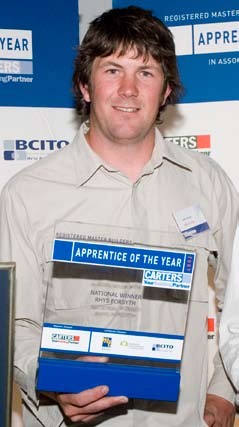 Now with his own business, Forsyth Contracting, and working out of Taupo, the 2007 Central North Island and national winner has fond memories of his experience in the competition. “It was cool times, especially with the guys I was working with. The competition capped me off nicely at the end of my apprenticeship,” Rhys says. “The Apprentice of the Year makes you strive for that little bit more and makes you do the best you possibly can. It’s a really valuable competition to compete in,” he says.

As well as building around the country with his own business, Rhys develops properties with his former employee, Gary Rowe of National Park Construction. “We team up for certain jobs that we need to do, and do our own smaller jobs as well. We’ve just renovated two ski chalets in National Park. They were relocatable houses which we fixed up and now rent out nightly,” Rhys says.

In 2007, Rhys told Apprentice of the Year judges about his career goal at the time to build accessible homes for the elderly and people with disabilities. He said these homes were about future proofing, “not only in the products we use, but in the design and layout of houses too”.

And he stuck to his goal, building his first home with wife Deanna with the entrepreneurial design style in mind. He finished the home in 2008 in time for the birth of their first child, now three-year-old daughter Lexa, and recently finished another accessible house for his mother and grandmother on Waiheke Island.

Rhys says he does a lot of work across the country, building in places including Rotorua, Taupo, Waiheke Island and National Park. While based mainly in Taupo, Rhys and his family spend up to 14 weeks over the winter at National Park where he also works coaching a freestyle ski team at Mount Ruapehu.

With the 10 regional winners of the 2011 Apprentice of the Year having now been announced and set to take on the challenge of the national competition, Rhys has a piece of advice for the aspiring Apprentices of the Year. “Keep your record up to date, make sure you’re taking lots of pictures of the work you’re doing and record it all. Not only does it help with the competition, but it gives you a really good record of what you’ve done,” he says.

The Apprentice of the Year competition is owned and managed by the Registered Master Builders Federation (RMBF), sponsored by Carters, partnered by the Building and Construction Industry Training Organisation (BCITO) and supported by the Department of Building and Housing.