Home Latest News If you seek his monument, look around 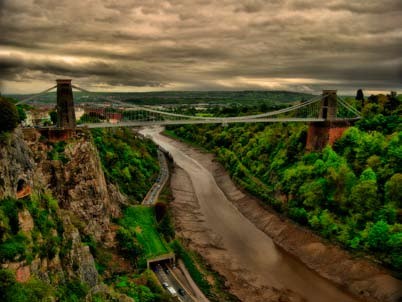 This is no mere superb construction — it is a work of art and is most easy on the eye. The good burghers of Bristol had long wanted a bridge across the Avon Gorge to link Clifton in Gloucestershire with Leigh Woods in Somerset. In 1753 a Bristol wine merchant had a dream. He left a legacy of £1000 with instructions that when the interest had accumulated to £10,000 it should be used to build such a bridge.

By 1829 there was just £8000 in the account, but the patience of the good folk of Bristol had worn thin. A competition to find an appropriate design yielded no suitable entries, but a second competition included Brunel. It saw him win his first major commission. Work started in 1831 but was halted by the Bristol Riots. Construction began again in 1836 but when the money ran out, the ironwork was sold off and used by Brunel to build the Royal Albert Bridge.

And so, when Brunel died in 1859 his first bridge remained uncompleted. His colleagues in the Institution of Civil Engineers felt a memorial needed to be raised to remember his genius. They set about raising funds which they used to complete the Clifton Bridge to provide that most suitable monument. William Barlow and Sir John Hawkshaw got the task of revising Brunel’s design. They added a wider, higher and sturdier deck.

They opted for triple chains instead of double, employing those salvaged from Brunel’s Hungerford suspension bridge over the Thames which had been demolished in 1860. Work was finally completed by 1864. If any readers are passing through Bristol, the bridge is well worth checking out — and the Avon Gorge Hotel lunch is pretty good too. The two towers differ. Brunel wanted them topped with a sphinx apiece, but financial realities got in the way of the final project, as they tend to.

Each of the three independent wrought-iron chains on each side is formed from 81 matching wrought-iron rods that range from 20m at the ends to 0.9m in the centre. These chains are anchored in tunnels 17m below ground level. At the top of each tower, roller mounted saddles allow the chains to move as loads pass over the bridge.

Despite being designed in the early 19th Century for horse-drawn traffic, it copes admirably with the demands of 21st century commuters. Some 11,000 to 12,000 motor vehicles cross it each day — or about four million per year. It is managed by a trust, with a toll of £0.50 levied per vehicle. Cyclists and pedestrians go for free.

Erection of the bridge featured in the TV series The Worst Jobs in History. Workers were plagued by continually swirling winds, with two men killed during construction. At one point a suspended construction platform was blown some 20m in the air, although all the workers on it at the time survived. Sadly, it has proved a popular suicide spot.