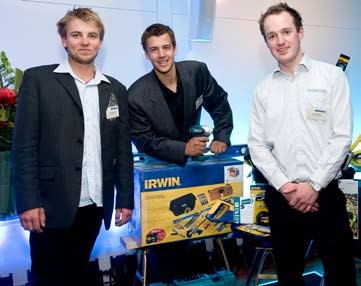 Both young men impressed national judges with their knowledge and practical skills in the October 29 competition held in Wellington. As well as proving their smarts in an intensive interview, the apprentices displayed their skills in three practical assessments at the Carters frame and truss manufacturing facility in Lower Hutt.

They each had to construct a tie-joint, frame a non-load bearing raking wall frame, then make a window reveal fit into the frame and fit the architrave. Third placegetter Tom Storey, 20, employed by Simon Linton Construction Ltd in Ohope, found the practical component challenging. “It would have been easy on any given day, but when you’ve got four judges and a few cameras looking over you, you make some silly mistakes. But it wasn’t too bad, there was some good pressure,” Tom says.

Despite the challenge, the judges saw what Tom had to offer. “He is very strong with his practical skills. He loves the physical side of the job, and he shone through in the competition with his workmanship. “Tom is also a very engaging person and has a great personality. He is enthusiastic, and possesses a strong knowledge of the industry which put him in good stead for succeeding in the competition,” the judges said.

Runner-up Matt Saathof, 21, who is employed by Gemco Construction in Havelock North, says the competition was a great experience. “I learned heaps from it all, and it was a really good challenge. I saw an improvement in myself after being involved. I definitely recommend other guys enter, because only positive things come out of it,” Matt says.

Judges said that during the competition, Matt took pride in himself and in producing quality work all day, every day. “He had a very good understanding of his project plans and had an excellent way of presenting the information he knew. “Matt has a great appreciation for the technical aspect of construction, and he stepped up with his practical skills to match,” the judges said.

As part of the Apprentice of the Year prize, all 10 finalists were given the opportunity to attend the prestigious Registered Master Builders 2011 House of the Year and RMB Commercial Project Awards, in association with PlaceMakers. “I had a really good time at House of the Year. I’m looking forward to being a part of it some day, it’s really something to strive for,” Tom says.

Tom has wanted to be a builder ever since he was young, always enjoying building things and being outside. Three years ago, he put his passion into action and got a job as a labourer for Simon Linton in his school holidays. “I worked really hard, and he offered me an apprenticeship,” Tom says. He’s now finished the apprenticeship and looking ahead to the future when he plans to open his own company and start winning some awards at House of the Year.

Tom is confident that other young guys should get involved and enter the competition. “I saw it as a chance to prove myself to other people. I didn’t see why not. You’ve got nothing to lose, so why not prove to everyone how good you are?” Tom says.

The Apprentice of the Year competition is owned and managed by the RMBF, sponsored by Carters, partnered by the BCITO and supported by the Department of Building and Housing.

Apprentices, employers and young people aspiring to be part of the construction industry are encouraged to join up to the Apprentice of the Year Facebook page at www.facebook.com/apprenticeoftheyear.