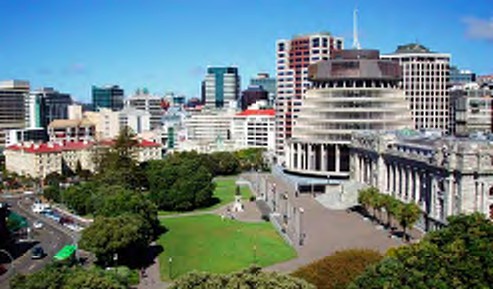 British architect Andrew Waugh recently spoke eloquently on national television as to the virtues of wood, specifically when it comes to rebuilding Christchurch. He is not the first to highlight the wholesale destruction that came to brick, stone and even concrete and steel buildings during Christchurch’s manifold quakes, particularly when compared with the relative survival of many wooden structures.

They wanted a Neo-Renaissance-style palace that would make a statement of New Zealand’s growing nationhood and its place in the Empire on which the sun never set. But, as is the way of governments around the globe, when push came to shove, they opted for cheap over concrete, and plumped for doing it in timber alone. Nonetheless, they asked the architect to mimic stone in the buildings’ facade. Kauri planks had already shown they were ideal for faking it at Government House in Auckland some 15 years earlier.

The architect was William Clayton and the contractors Scoular and Archibald. Construction took 22 months and the largest building in the country opened in 1876 at a cost of £39,000. Today it is regarded as one of the country’s most important historic buildings. Its vulnerability to fire was recognised quite early, with OGB becoming the first building in the world with a smoke-free policy.

It initially housed the entire New Zealand Cabinet and all the Wellington-based civil service. But the civil service grew rapidly — as they do — with the first department leaving the building soon after opening, despite extensions that included the wings being added in 1897 and 1907.

By 1975 only the Education Department remained. When they finally vamoosed come 1990, the empty building was given a total restoration. Johnny-come-lately partitions were dumped. Multiple layers of paint were stripped. Long-gone features were restored, such as the verandahs, late Victorian water radiators, the original clock and coat of arms, a water-powered hydraulic lift, and even the fireplaces, if only as decorative features. Importantly, the staircases were reinstated in their full glory.

The totara piles were replaced with concrete, and the structural framing of Tasmanian hardwood augmented where necessary with good old pinus radiata. More than 500 cubic metres of recycled kauri was needed to repair or replace original timber weatherboards, flooring and finishing timbers. Today, a limited number of rooms are open to the public, with the majority leased to the Victoria University School of Law.

From Christchurch’s viewpoint, it is worth noting the building is constructed on reclaimed land from the 1855 earthquake. It is situated near a major fault line and has survived several significant quakes such as that of 1942 with nary a scratch.

Proponents of the use of wood in reconstructing Christchurch point to the Knox Church as one of the few historic buildings in the red zone that may be saved. It lost bricks and mortar but its substantial wooden frame is still standing largely intact.

The media quoted NZ Wood’s James Guiver on his product’s virtues: “Wood is lighter and won’t suffer the same damage.” … “It acts as a series of elastic bands inside the building, so when it is under a lot of force the building will move around a little bit.”

For his part, Andrew Waugh advocated constructing buildings inside Christchurch’s red zone similar to his nine-storey London apartment block. He notes they can be assembled quickly: “Prefabricate the walls, the floors, crane them in, and screw them together.