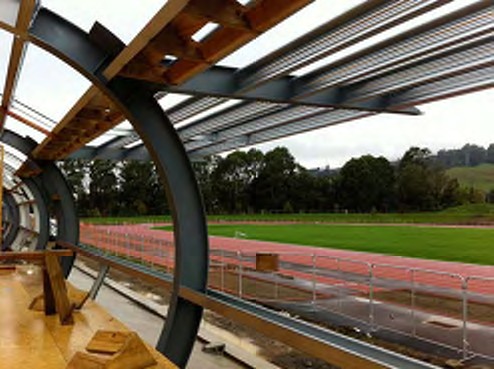 It is a regional facility meeting the sporting and recreational needs of the Nelson and Tasman regions. The latest development of the plan is the new Saxton Oval Pavilion that caters for cricket, football and athletics. “The new pavilion is a shared facility,” Nelson City Council principal adviser, reserves and community facilities, Andrew Petheram says. “The brief given to Arthouse Architecture was for an iconic building that clearly identified the Nelson region, while remaining simple, functional and cost-effective.” Mr Petheram says. “The facility is also to be available for community social use when not required as a sporting venue.”

Arthouse Architecture director Jorgen Andersen says his team responded to the brief at a time when the firm’s computers were temporarily down because of a server crash. “We all sat around our boardroom table and brainstormed. Essentially what we came up with was a cylinder 100m long by 20m wide. It is positioned between the cricket/football field and the athletics oval, and can comfortably serve both sides simultaneously,” Mr Andersen says.

“Our design was for 20 portals, and rather than use laminated timber to create the curved portals, we elected to use steel, which had the advantage of being slimmer. “We considered zinc sheeting for the cladding but opted for corrugate because of cost. Also, it could be bent to meet our chosen low profile without any loss of aesthetic appeal. One added benefit of our design was that the building could be naturally ventilated.”

As the steel constructor on the project, Christchurch-based Chapman Engineering Ltd quickly got the fabrication of the steel portals underway. Managing director Chris Chapman says the portals were fabricated by profiling the curved web from plate steel.

“The flanges were fabricated by welding rolled steel flat to the web. Being already stretched, the flats could be welded to the web with no major issues of warping or buckling, so long as we didn’t put too much heat into the welds. We used a jib to make sure that the web and flanges stayed in place,” Mr Chapman says. “The steel portals were fabricated in two halves to be joined at the centre of the apex once on site. They were transported from Christchurch to Nelson — a round trip of 848km — in two loads, with a separate delivery of purlins.

“Erection was straightforward. The concrete slab under each portal had cast-in bolts, making it possible to fit the steel perfectly to the foundation. This also kept the slim portal legs from spreading apart, and prevented twisting. The purlins simply butted into the sides of the curved rafters. “The steel frame was modular and repetitive — except for the two ends where the first portals obviously had no posts. Two half-portals for one side of the building were stood in the assembly area, where purlins were fitted to maintain their shape. They were then lifted from the assembly area onto the holding down bolts in the concrete slab.

“Their apexes rested on centre posts. A matching opposite pair was then stood and also fitted with purlins. Once this pair was placed, the completed curve was bolted. Each bay was self-supporting, so that when a follow-on pair of portals was placed, the resulting gap to the previous pair was closed by the fitting of the purlins. “The entire job was erected by two riggers and a welder. Having been grit-blasted and coated in epoxy zinc before being despatched from our workshop in Christchurch, the steel was given a final top coat once erected,” Mr Chapman says.

Freeman Roofing supplied the corrugate, rolling the sheets on site ready for erection. Wayman Roofing erected the cladding. Since the “roof” also became the “walls”, Chapman Engineering had to pay particular attention to maintain the purlins in an absolute straight line along the length of the building. For its interior, Saxton Pavilion uses plywood to wrap around its curved bay walls. It has changing facilities at both ends, with umpires and referees accommodated separately from teams. There is a first-aid room and a lounge, which has a dropped acoustic ceiling. Sliding panels open up a full commercial kitchen and a bar, which can cater for 130 people with no echo.

Heating is needed only in the athletics control room. Funding for the entire Saxton Field was provided jointly by the Nelson City Council and Tasman District Council. Generous grants were also made by the New Zealand Community Trust, Canterbury Community Trust and the New Zealand Lottery Grants Board. The Saxton Field Stadium Society also contributed to the project, overseeing the construction phases of the stadium throughout 2009. The Tasman Regional Sports Trust will manage the

Saxton Stadium, with Sports House now the regional hub for the sports administration of many codes. The Saxton Oval Pavilion takes its place as the latest facility serving the sporting, recreational and social needs of the community at the Top of the South. Arthouse Architecture is very proud of this project for its aesthetic, its response to the site and the way it satisfies the demands of serving many user groups, sometimes using opposite sides of the pavilion at the same time.

“It’s always a challenge to deliver a unique building within a fixed budget, but we are delighted with the result here. We wanted to create an iconic building but one that nestles into the landscape without dominating,” Mr Andersen says. The main contractor on the Saxton Oval Pavilion project was Nelson-based Scott Construction Ltd. Managing director Justin Candish says his company tendered for the contract on his company’s attributes rather than price.

“We worked closely with Chapman Engineering to ensure we had an efficient methodology that would make us price competitive,” Mr Candish says. “Our approach was such that although the Christchurch quakes disrupted our programme, we were still able to complete the project by our target date.

“The local communities tell me they’re impressed by the pavilion, and they’re glad their council chose an out of the ordinary design by local architects. As a sporting venue, Nelson will be giving Queenstown a run for its money!”