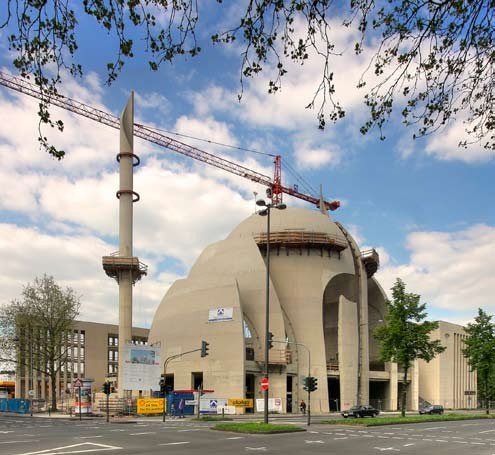 In 2007, German Muslims commissioned the building of a large central mosque in Cologne. About 12% of the population of Germany’s fourth largest city are Muslim — some 120,000. At the time, most of the 30 mosques in the city were small. The largest could accommodate just 600 people and was housed in a converted pharmaceutical factory.

Predictably, the announced plans precipitated a city-wide controversy. Right up front were the usual suspects — the neo-Nazis — but concern came from less extreme groups and the general citizenry.
The city council was divided. The deputy mayor proclaimed, “We don’t want to build a Turkish ghetto in Ehrenfeld. I know about Londonistan and I don’t want that here.” However, the mayor embraced the new building.

In the event, debate swelled across the entire country centred largely on claims that (a) Cologne was a Christian city and (b) the dangers of growing “Islamisation.” For its part, the Catholic Church not only supported the mosque but St Theodore’s Catholic Church undertook fundraising for the project.
The go ahead was finally given by the Cologne City Council on August 28, 2008, with just 30 protesters outside. And since construction began in 2009, any criticism has become far more muted. In large part, this can be credited to architect Paul Bohm’s inspired design.

Ottoman influence
The mosque is large, occupying some 4500sq m. While it shows a profound Ottoman architectural influence, Bohm has very deliberately designed it to communicate a sense of openness and invitation.

The building is formed from flat wall screens that merge to become the central dome that “appears to open like a bud”.
Upstairs is the prayer area and a Muslim library. Downstairs is a bazaar, lobby and lecture halls. The two levels are connected by a well that creates a pleasing atmosphere. Glass walls impart a feeling of openness that is further enhanced by a staircase rising from the street.

Secular areas of the mosque include a restaurant, event halls and bazaar, and are open to all people regardless of religion.
Outside stand two 55m minarets. In the planning stages their height focused much of the disquiet. There was concern they would overshadow Cologne’s famed cathedral.
The city’s mayor encouraged the use of shorter ones, but Bohm disagreed, pointing out that this would make them out of proportion with the rest of the building and surrounding structures.

‘Religious architecture milestone’
Now that the mosque is nearly finished, it is being hailed as a new artistic and social vision for the city, a veritable “milestone in religious architecture”.
It is one of the few new major buildings in central Cologne with a distinct style, and not made of the uniform steel and glass that was the norm in the rebuild of the bombed-out city, post-WWII.

For Paul Bohm, the new building is itself an act of integration. He told Deutsche Welle: “This is one of the most important buildings I have ever designed. It’s given me a chance to do something which is not only for a specific group of people, but for the whole community.”

The building opened in early 2012 with little interior design other than natural light which cascades through a flank of windows.
One day it may feature classic Ottoman mosaics or other decorations drawn from its Islamic heritage, but that is for the community to decide in its own time.