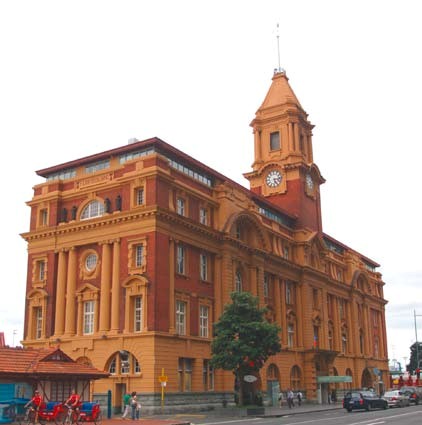 In the hurly burly that has cluttered our year to date, including the teething pains of a Super City, sundry occupations of assorted CBDs, Christchurch’s never-ending torment, and the consistently inconsistent performance of the New Zealand cricket team, an important building centenary almost slipped under the radar.

This year marks 100 years since completion of the Auckland Ferry Terminal. New Zealand’s Historic Places Trust rightly describes the ferry terminal as one of the most imposing port buildings in New Zealand. It is an architectural gem.
It was erected by the Auckland Harbour Board between 1909 and 1912, intended to provide the focus for the extensive ferry network then servicing the growing city.
But the Harbour Board of the day attached a greater importance to it than a simple terminal. They wished to make a clear statement that Auckland was an important Southern Hemisphere port.

To this end they chose to build an imposing four-storey structure with a striking Imperial Baroque facade. Oddly, for a local body, cost was never a factor. The Board was prepared to outlay a significant sum for the day — £67,944, for just the building itself — while also undertaking an expensive reorganisation of the docks that would give their new ferry terminal pride of place at the bottom of Queen Street.

The terminal was constructed on the land reclaimed in 1879-1885 from what had been Commercial Bay. The building was designed by Alex Wiseman and built by Philcox and Sons.
Coromandel granite provided the base course and plinth. The magnificent facade employed Hawkesbury Sandstone, one of the few buildings in Auckland to use this honey brown building stone that so dominates the historic structures of Sydney.

On the ground storey, sandstone blocks form the main structure. The upper floors and towers are constructed of brick with a sandstone veneer. Each floor is of reinforced concrete, and the roof was originally covered with Marseilles tiles.
On completion, the stature of the building ensured it quickly became the focus of the harbour that then enjoyed a central role in the commercial and social life of Auckland city.
Importantly, the Board had cunningly designated the entire building for lease to provide them with a regular income. In this respect it was one of the earliest dedicated office blocks in the city.

For many years the central tower carried a time ball that regulated activity on the wharves. It was later replaced by a clock and siren.
In the building’s centenary year it would have been appropriate if the time ball had been reinstated to provide a tourist attraction, as does that restored on Sydney’s downtown observatory.
And then came the Harbour Bridge in 1959. This had a severe impact on all local maritime activity, particularly the waterfront. The ferry terminal quickly fell into disuse and, from there, into a sad state of disrepair.

It was saved from demolition by being given a Category 1 listing by the New Zealand Historic Places Trust in 1982.
However, it was not until the late 1980s that it received a total makeover at a cost of about $8 million. This saw it converted back to its original use for office and retail — and a ferry terminal. It also included the addition of a fifth storey.

In his Historic Places record, Martin Jones observes the terminal’s significance lies in it “having been a familiar landmark for nearly 100 years, instilling a sense of place and identity in the everyday lives of Aucklanders travelling in and out of the city over several generations.
“The Ferry Building’s valuable visual contribution to the city’s waterfront is enhanced by its proximity to other historic structures, including those in the surrounding Harbour Historic Area and nearby Quay Street Historic Area.”

And today, of course, several generations of Aucklanders have grown up never having viewed this spectacular piece of architecture as originally built, a focus at the end of Queen Street, unhindered by glass towers. Perhaps their children may do so one day.