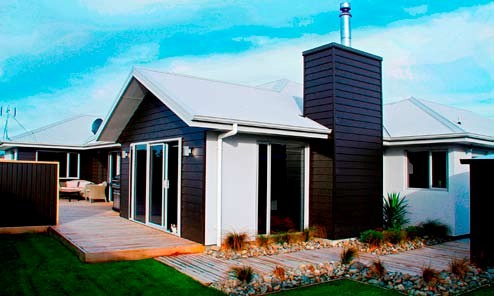 The company was awarded the Department of Building and Housing New Homes under $250,000 award at the National Gala in Auckland last year.
“When our name was announced, we didn’t hear any more of what was said because we were too busy yahooing and carrying on. We were pretty chuffed about it all,” Mr Hughes says.
In the business for 35 years, B W Hughes Building Company Ltd started entering the House of the Year in 1992. The company has picked up a number of awards in the Manawatu region’s competition, also taking out the local Supreme Award in 2006 and 2008.

Mr Hughes stresses that if you’ve got a home that you think is good enough to enter, then do it.
“If you think the property is quite good, put it in, and stand by it,” he says.
“We’ve won Gold Awards and Silvers and don’t always go right to the top, but it gives you a good name, it’s good advertising and it’s good for business.”

The winning three-bedroom Feilding property was built to take advantage of all-day sun, and boasts a modern external finish with kerbside appeal in a quiet rural setting.
“It was a bit of an art because it was on a corner site. The back of the property was facing north, so the front of the house was the colder side,” Mr Hughes says.
“We used the back of the house to pick up the sun, with big decks, windows and doors out the back which draw in the sun all day and keeps the home warm.”

Judges said the “beautifully designed home delivers privacy and a stunning living environment with clever orientation of living areas to the north”.
“The brief has been met with a lovely home designed and built hands-on by the builder, with all of the work executed to a very high standard,” they said.
Workmanship is a big part of the House of the Year competition, and is something the company strives for.
“My guys are awesome. They won’t just say, ‘She’ll be right.’ They make sure it is right, and it’s always been that way for us,” Mr Hughes says.

Mr Hughes’ son, Andrew, is also a pivotal member of the team, having been involved in the company now for more than 12 years.
“He’s running the team out on site now, which is great for me. One day he’ll probably take over and I’ll pull out and sit on a beach somewhere,” he says.

Entries for the Registered Master Builders 2012 House of the Year, in association with PlaceMakers, have now closed. The Awards are made possible through the support of PlaceMakers, James Hardie, Gib Living Solutions®, Nulook and the Department of Building and Housing.