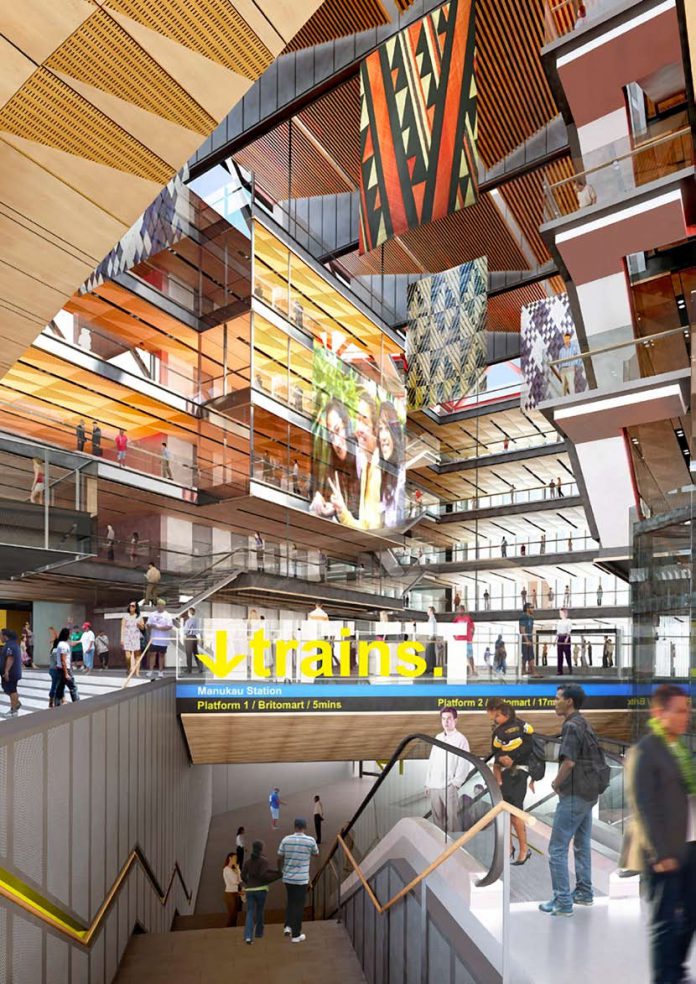 The first stage of Auckland’s newest train station and the first rail line built since the 1930s will open in Manukau on April 15.
When passengers begin using the first stage of the Manukau Station development they will enter through a temporary station entrance to the completed platform areas in a rail trench below ground level.

Construction will be continuing above ground on the second stage, a $95 million integrated transport hub and tertiary campus at the Manukau City Centre site next to Hayman Park.
When complete in 2013, the new station entrance will be on the ground floor of the Manukau Tertiary Centre. When this second stage opens it will have high quality facilities, including a ticket office, with easy connections between trains and buses leaving just outside the station entrance.

Auckland Transport and Auckland Council have partnered with Manukau Institute of Technology in the development, and Kiwirail have built the 2km rail line from the Southern Line to the Manukau City Centre.

Auckland Transport, train operator Veolia Transport and Kiwirail are working together on the start of new services to Manukau.
For initial services, Manukau Station will have three trains an hour in peak times and one train an hour at other times.
Buses from Botany, Flat Bush and Redoubt Rd will be extended to Manukau Station, providing a connection between buses and trains.

“What is opening soon is just the beginning of the station development and train services in preparation for the arrival of new electric trains,” Mr Lambert says.
“Auckland Transport, Veolia and Kiwirail have agreed on a phased introduction of rail services to Manukau. We are continuing to review the timetable with Veolia to see what improvements can be made on other parts of the rail network.”

Veolia Transport managing director Graham Siberry says everyone is delighted to be helping add a new branch line service.
“We will work hard to continue to deliver an excellent rail service and grow the network. It’s wonderful to see customers choosing rail in increasing numbers.”

Auckland mayor Len Brown says it is great news that trains will soon start running to Manukau City Centre.
“People can also look forward to a really high quality station building opening next year as part of the Manukau Tertiary Centre,” he says.
“The Manukau Station and rail line is a classic example of the transport infrastructure that would be built from revenue generated from the Council’s Alternative Transport Funding Sources programme.

“Existing funding sources fall well short of what is required to provide the facilities and systems to move people and goods efficiently and in a co-ordinated manner by road, rail and sea in greater Auckland,” he says.
“At least $10 to $15 billion of alternative funding is required to meet the transport needs of a rapidly growing population, estimated to be 2.5 million in 2030.”