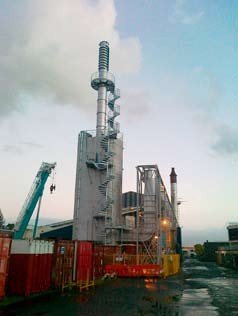 From last month Auckland’s air got a little cleaner.
While industry pollution contributes to around 10% of Auckland’s poor air quality, the Council’s pledge to clean this up took another step forward.

Tasman Insulation’s site in Penrose, which produces Pink Batts insulation, has installed a new wet electrostatic precipitator (known as a WESP) which cleans up manufacturing emissions. The old stack was dismantled before the new system came into use.
“Any reduction of Auckland’s dirty air is a good thing,” Tasman Insulation general manager Tony Te Au says.
“And as a large manufacturer, we have a responsibility to improve the air quality of our city.”

Tasman Insulation project manager Jerry Miller, who has overseen the WESP’s construction, says you could sometimes see the smoke haze coming from the old 33m stack in Penrose.
“However, the new stack has no visible smoke whatsoever,” he says.

Auckland’s serious PM problem
Auckland has a serious problem with PM10, the particle matter discharged from gas stacks such as the one at Tasman Insulation’s Penrose site.
The new WESP will remove 90% of PM10 emissions, leaving no visible plume, except for some water vapour on particularly cold mornings.

Work started in November at the Penrose site to install the new $4m stack. Rather than releasing them, it collects the particles, passes the air through a highly charged electric  field where they get charged and are then attracted to the surface with the opposite charge — rather like the north and south poles of a magnet.
“It’s the principle of opposites attracting,” Mr Miller says. “The WESP uses water to wash the particles off these surfaces, and the particulates are then dealt with by the plant’s wash-water system.”

Auckland City Council asked Tasman Insulation to use the best practicable technology to tackle its emissions, and the company was happy to oblige. WESPs are increasingly popular throughout the world in this sort of application.

Around 90% of PM10 emissions in Auckland are from older diesel vehicles and house fires. Manufacturing contributes the other approximately 10% of PM10 in the city.
PM10 is of particular interest to environmental protection agencies because it is associated with negative health effects, and Auckland’s air regularly exceeds the national air quality standard of 50µg/m3.

These standards are based on best practice in Europe and the United States.