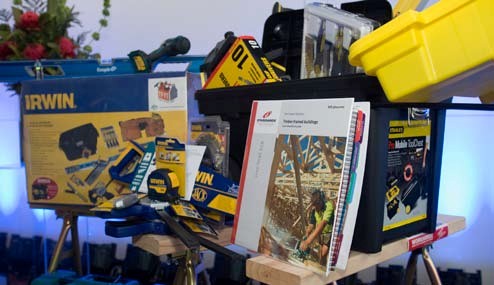 The construction industry is showing signs of improvement, and the need for skilled carpentry apprentices is crucial for the future of the sector.
Home building consents rose 8.3% in January compared with December 2011, with 209 consents issued in Christchurch alone, up from 61 in the previous month.

This trend is expected to continue as the Christchurch rebuild, repairs to leaky homes and the housing shortage in Auckland all bring about new projects within the industry.
Registered Master Builders Federation chief executive Warwick Quinn says the industry is really gearing up for an influx of work over the next few years.
“There will be plenty of work which will require an incredibly high demand for skilled builders, many of whom will be entrants or employers in this year’s Apprentice of the Year competition,” Mr Quinn says.
“Today’s apprentices will be right in the thick of the demand, and they are the future business owners that New Zealanders will be trusting to put their homes and buildings back on track,” he says.

Entries are now open for the Registered Master Builders Carters 2012 Apprentice of the Year, and organisers are expecting the quality of entrants will prove that New Zealand’s building sector is in trusted hands.
“It is important for employers to encourage young people to get involved, so they too can become a vital part of the industry’s future,” Mr Quinn says.

Former Apprentice of the Year judge and Wellington builder Dave Mudge says judges in the regional competition will be looking for someone who is hands-on and practically minded, as well as being able to deal with the administrative side of building.
Mr Mudge says it is important that apprentices enter a good submission, because judges will use it to gain an understanding of who the apprentice is before they meet.
He says the judges are looking for “punctuality, appearance, overall manner and respect towards the judges” during the interview.

While it may seem like a nerve-wracking experience for apprentices, Mr Mudge says he’d never hold their apprehension against them.
“It’s daunting — one apprentice by themselves, and three judges. Have respect for the judges, but don’t be worried about them,” he says.

The interview is finally followed up by a site visit where judges will assess a number of aspects, including health and safety, tools, quality of workmanship, attitude and teamsmanship.
With more than $100,000 worth of prizes up for grabs, as well as the coveted title of 2012 Apprentice of the Year, the competition aims to highlight career opportunities in the construction sector, and provides a chance for carpentry apprentices to be recognised for their incredible talent, skill and drive.

Entries for the Apprentice of the Year are open until June 28, 2012. For further information, or to download an entry form, go to www.apprenticeoftheyear.co.nz. Entry forms can also be collected from Carters stores nationwide.
Apprentices, employers and those young people aspiring to be a part of the construction industry are encouraged to join up to the Facebook page at www.facebook.com/apprenticeoftheyear.

The Apprentice of the Year competition is made possible thanks to principal sponsor Carters, the Registered Master Builders Federation, the Building and Construction Industry Training Organisation (BCITO), and supporting sponsor the Department of Building and Housing.