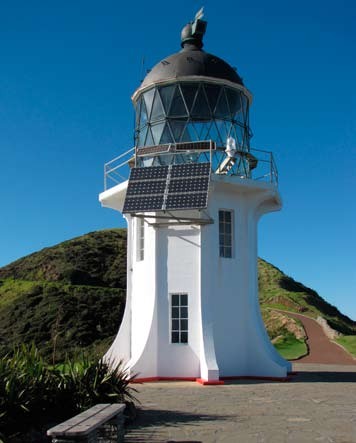 Each year more than 120,000 people visit Cape Reinga and its lighthouse. The Cape itself is certainly worth checking out as it is currently vying for UNESCO World Heritage Site status.
Cape Reinga lies at the northwestern-most tip of the Aupouri Peninsula, more than 100km north of Kaitaia.

The Cape’s name refers to the afterlife. It is the location where the spirits of the dead can leap off the headland, scale through the branches and roots of the ancient pohutukawa nearby, and descend into the underworld.
It is the separation marker between the Tasman Sea and the Pacific Ocean. A great turbulent tidal race can be seen seawards off the Cape where the two water masses clash. For Maori, these two seas are male and female respectively. But the light itself is worthy of attention.

Its location means it is one of the first New Zealand lights ships observe when arriving from either the Tasman Sea or the Pacific.
For shipping it is a most welcome site, with more than 120 wrecks littering Northland waters.
However, the full story of our northern New Zealand lighthouses is a saga of bungling bureaucrats and procrastinating politicians. It is too long to detail here. Suffice to say that the first northern-most light was built in 1879 on Motuopao Island, off Cape Maria van Diemen, some 25 years after it was advised.

Three resident keepers were required to service it, and the keepers’ families struggled to survive on their tiny island. Among other things, the site was a pig to access and totally exposed.
In 1933 an assistant lighthouse keeper’s wife was swept off the rocks and drowned. It took four years, but in 1937 a decision was taken to construct the present light on the mainland at Cape Reinga — in the interests of staff safety. It would be the last staffed lighthouse built in New Zealand.

The simple concrete tower for the relocated lighthouse was completed in 1941 when the first light was duly lit. However, up until the end of World War II it was little used due to war-time blackouts.
The new light required two keepers. For some 20 years it was one of the least accessible light stations in New Zealand, but when access improved in the 1960s 200 visitors a day stopped by.

Originally the Cape Reinga light was powered by diesel-generated electricity. In 1987 it was fully automated and the last keeper withdrawn.
In April 2000 the original light and related equipment was removed. It was replaced with a modern rotating white light beacon powered by a 50 watt tungsten halogen bulb that flashes once every 12 seconds.

The light’s range is 19 nautical miles or 35km. Power now comes from battery banks charged by solar panels. While the lighthouse remains accessible to the public, there is no public admission to its interior.
And, in case any reader is geographically challenged, Cape Reinga is not the northern-most point of the North Island. That honour goes to Surville Cliffs, 30km east, on the North Cape headland.