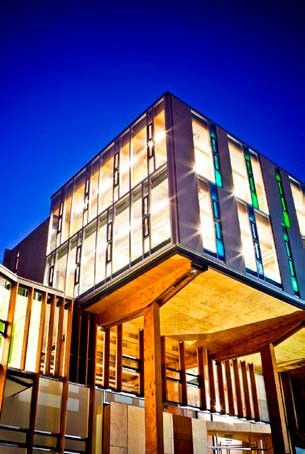 A locally developed timber building system that enables fast re-occupation after an earthquake has emerged as world-leading at a recent gathering of international timber engineering experts.

The World Conference of Timber Engineering (WCTE) was held in Auckland last month, bringing together more than 500 researchers, engineers and designers in a global forum of research, innovations and developments.
Standing tall amongst the hundreds of presentations was research from the Structural Timber Innovation Company (STIC), a research consortium made up of New Zealand and Australian commercial and academic partners.

STIC is behind the development of EXPAN — a unique post-tensioned laminated veneer lumber (or glulam) building system that offers superior seismic qualities and lateral stability for multi-storey and long span buildings.
In the event of an earthquake, an EXPAN building stays structurally intact through a controlled rocking mechanism and timber components that give strength without weight to minimise acceleration loads caused by ground shaking.

Rest of the world ‘waking up to NZ’s recent advances’

“The rest of the world is now waking up to New Zealand’s recent advances in low-damage seismic design of timber structures,” Professor Quenneville says.
“Conventional design philosophy is based around an acceptance of some structural failure — where people get out safely in an earthquake — but the building is not able to be saved, or major repairs deem it uneconomic to fix, or it is unusable for a long time.
“It was clear from the conference that the EXPAN building system is currently the only one in the world that offers the certainty of low-damage design using engineered timber.”

STIC chief executive Dr Robert Finch says it’s fantastic to see New Zealand leading the world in this hugely significant area.
“As we see thousands of buildings being demolished in our second largest city, this design philosophy becomes ever crucial,” Dr Finch says.
“Commercial building owners and tenants no longer need to accept that a major earthquake means they’ll be out of their building for a long period of time, or not get back in at all.
“Here we have a comprehensively-researched, proven damage-avoidance seismic technology that enables buildings to remain serviceable after a sizeable quake.
“Massey University’s CoCA building has just become the seventh building in the country to utilise this cutting-edge building system, and we’re looking forward to seeing Christchurch’s first two EXPAN buildings go up in coming months,” Dr Finch says.