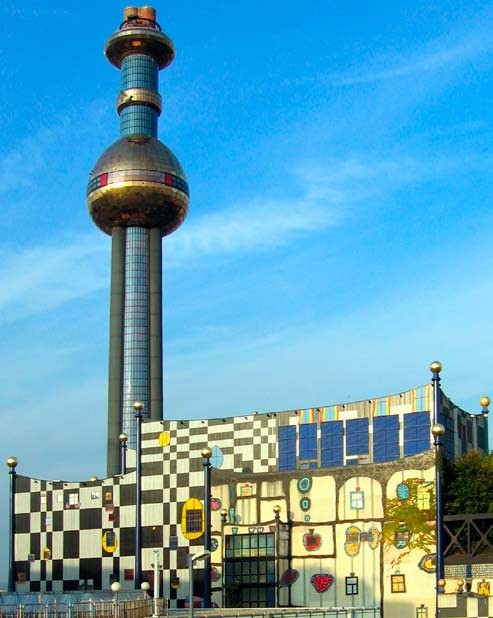 Hundertwasser is one of few that could convert a garbage-fuelled power plant into a work of art, one that is now a major tourist drawcard. Mind you, he was most reluctant to do so. He was dark green to the core. He abhorred waste.

The Spittelau incinerator is one of three thermal waste treatment facilities in Vienna. It was built on the Danube in 1971 to burn garbage and supply energy to the surrounding buildings. In 1986 it was retrofitted with a state-of-the-art flue gas wet scrubber to reduce gas emissions. A major fire swept the facility in 1987. Following repairs, the mayor of Vienna approached Hundertwasser, then a well known, if somewhat controversial environmental artist and architect, to redesign the entire facade.

Hundertwasser at first declined the commission — he had fundamental objections to any garbage-incinerating plant. But the mayor persevered. And an environmental friend convinced the artist that a city as large as Vienna would always have rubbish to burn even after all other possibilities for garbage disposal had been exhausted. As a result, Hundertwasser agreed to convert the municipal plant into an environmentally sound work of art. He also declared he would undertake the work pro bono provided the incinerator was fitted with the latest technology to minimise environmental harm. The mayor accepted with alacrity, and had a denitrification and dioxin destruction facility added in 1989.

The final result was spectacular. The original had been an engineer’s functional delight in standard issue ferroconcrete and steel. Although Hundertwasser shunned conventional architectural concepts in his structures, in his Spittelau makeover he used conventional building materials — concrete, steel, glass, ceramic tiles and enamel to achieve a harmonious symbiosis of technology, ecology and art.

There is no paint on the exterior. Rather, the surface is covered in corrugated metal sheets and concrete, and divided into an irregular checkerboard pattern of black and white. Horizontal rooflines have become saddleback arches, and vertical corners are blue pillars capped with gold spheres. All parts that point towards the sky are blue. Yellow provides accent, particularly on the oil tanks and the building’s lower portions.

Windows of varying sizes, and trimmed in a variety of colours, are scattered over the plant’s surface. The windows are of metal-coated glass in hues of blue, red, gold, silver and copper. Some are transparent and others translucent. Broken bits of ceramic tile are inlaid in asymmetrical patterns around the base of the smokestack and many of the windows.

A large golden sphere, 58 feet across and covered with 1150 gold enamel plates, tops a blue and red-tiled smokestack that can be seen citywide. The sphere is functional, protecting monitoring mechanisms, and providing a nesting site for kestrels. At night it is illuminated with fibre optics.

The different colours of the facade were chosen very deliberately:  • Black and white for the Viennese Secession and for the contrasts of coal and ashes, and light and darkness. The irregular checkerboard pattern describes the struggle against the uniform grid of contemporary architecture. • Blue is for the sky, clean air, and clean water. • Multi-coloured enamelled ceramic pieces denote swirling pieces of garbage. • Yellow stands for the cleansing fire. • The coloured windows evoke richness but also the twilight of our contemporary society. • Gold holds hope for our future harmony with nature.

Following its completion in 1992, the Spittelau incinerator quickly became part of the Viennese cityscape. The citizens delight in it, as do the tourists. And it remains fully functional. Each year it burns some 260,000 tons of garbage. Five hot water boilers generate 400MW at peak load. The 40,000MWh of electricity and 470,000MWh of heat produced supply the needs more than 60,000 households. Importantly, the Spittelau incinerator provides a remarkable monument to an idiosyncratic artist who left our world a brighter and more colourful place than he found it.