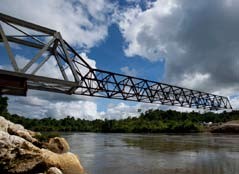 Eastbridge, a long-standing member of Steel Construction New Zealand Inc, is growing its reputation, at home and abroad. How the 600-tonne bridge got there is another story — by sea from New Zealand to the port at Port Moresby; by barge upriver to a temporary wharf at Kopi; and by truck 200km north-west on a new purpose-built road.

In PNG the terrain makes transportation tough, with many rivers to cross and, as yet, not enough bridges. The bridge is part of the PNG LNG Project, the 6.6-million tonne per annum project operated by Esso Highlands Ltd, a subsidiary of Exxon Mobil Corporation. The project is commercialising gas resources from the Hides, Angore and Juha gas fields and associated gas in the Kutubu, Agogo, Moran and Gobe main oilfields.

The site for the Mubi River Bridge was chosen to improve access to and from the gas fields to the north, and to service the construction of a new pipeline. The river bed can be up to 30m deep during the wet season (June to August), the soft limestone having been gouged by fast-flowing water and eroding rocks. Constructing in-river piers, which would have to withstand bombardment by debris, was ruled out. Across the swirling waters of the Mubi, a single-span bridge was deemed the safer solution. The challenge lay in its span — 112m.

Esso Highlands awarded the contract to Eastbridge of Napier. Eastbridge has a long and successful history of supplying bridging for remote regions of PNG. The scope of this contract was not only for the supply of the bridge, but also for the design of the launch installation. For the detailed engineering design, Eastbridge elected to partner with Holmes Consulting Group. “The bridge foundations were designed by an Australian consulting engineer,” Ian Hills of Holmes says. “We concentrated on the steel super-structure, working closely with Eastbridge, with whom we had also worked on the Matahorua Gorge Bridge near Napier. “For Mubi, Eastbridge had developed its own proprietary variation of the Warren Truss, which we set about designing for an area of high seismic activity. Designed to the Australian

Standard AS5100, the bridge also had to accommodate the specifications of Esso Highlands, as well as the requirements of the Project’s Upstream Infrastructure contractor, Clough Curtain Joint Venture. “The bridge was designed for 44 tonne vehicle loads but, in addition, sufficient strength was required for a 60-tonne overload vehicle.  “Working with welded beam primary sections, we designed a truss that was 8m deep, all of the main bracing members being bolted to the “W” pattern. “The basic design was quite straightforward. However, much care went into the detailing. Because of the remoteness of the PNG location, the maximum length of the members that Eastbridge could deliver to the site was restricted to 9m.”

The Eastbridge launch methodology required the 112m truss to be assembled entirely on one side of the Mubi River, on rails with skids at each bottom chord node point. Hydraulic jacks would gradually push the truss from one bank out over the river to touch down on the opposite bank. The landing needed to be spot on. Eastbridge compensated for the deflections of the cantilever over the river by attaching to the main truss a 52m lightweight 40-tonne “nose”. To equip this “proboscis” with a degree of controlled adjustment, hydraulically operated rockers were installed on a pier next to the river, enabling the launch angle to be raised or lowered according to the engineer’s theodolite readings and calculations.

“When you’re in the middle of the jungle, three hours’ flying time from Port Moresby, there is no margin for error,” Eastbridge general manager Andre Van Heerden says. “You can use only what you’ve brought with you! We needed 60 tonnes of kentledge, so we used 10 tonnes of our fabricated steel decking and 50-tonnes of concrete blocks. “Two 200-tonne jacks positioned at the back end of the truss generated a force of 140 tonnes to overcome the inertia. Each stroke moved the truss 850mm,” Mr Van Heerden says. Senior project engineer Richard Johnson of Clough Curtain Joint Venture says they’d make 13 strokes in a cycle, then disassemble the gear, re-set and start the next cycle. “Once the launch had been started, we worked 24-hour days in two 12-hour shifts. I’m happy to say that all went smoothly, and the bridge was installed in little more than nine days.“

Mr Van Heerden was also pleased. “I like it when good planning and good teamwork result in a good outcome. We galvanised all the steel members of the bridge before they left Eastbridge. “We are confident that the bridge will have protection for well in excess of the anticipated 30-year project life,” Mr Van Heerden says.