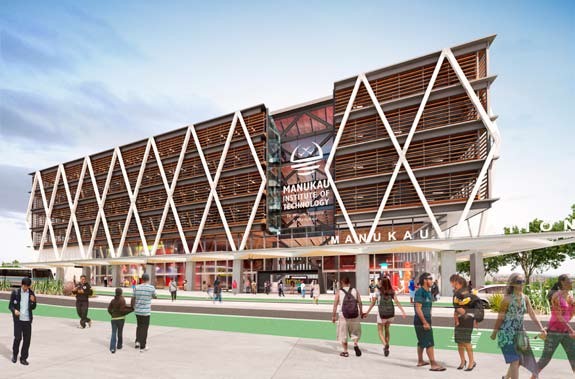 The first structure of the proposed 65,000sq m campus is comprised of three seismically separated buildings that are constructed around and over the fully operational train station, and rise to six storeys. Principal Blair Johnston of architects Warren and Mahoney says the central, enclosed atrium space “creates a common campus heart that signifies the moment of arrival for students and commuters alike . . . It reflects MIT’s desire for ‘a highly efficient, open and interconnected learning landscape’ “The teaching floors have classroom spaces around the perimeter of the building, with open flexible learning spaces and break-out areas located around the atrium edge,” Mr Johnston says.

An exposed raking column steel frame on the north and east elevations is the key feature of the exterior appearance of the building, and required close integration of the architectural and structural design.

Holmes Consulting Group project director Jeremy Austin says because of their geometry and their position outboard of the main structure, the raking frames bear high axial and torsional loads. “The raking frame members are welded box sections connected by three types of nodes — Y-nodes at the base, X-nodes at mid-height, and inverted V-nodes at the top,” Mr Austin says. “Since the nodes are exposed in the finished facade, their design had to be simple and neatly detailed. Full penetration welds of the 40mm plate steel were needed to ensure adequate transfer of the forces. “All welds were ground flush to provide a high level of finish. The connections are fully bolted site connections — site welding was avoided for durability and aesthetic quality reasons. Full tension friction bolts were secured to captured nuts inside the box sections.

“The steel beam that supports each floor is set inboard of the raking columns. The twisting caused by this eccentricity is resisted by minor axis bending in the braces. The interior sides of the building have conventional column and beam steel frames, utilising concrete-filled Circular Hollow Sections (CHSs) and a collar arrangement for the beam to column connections. “Lateral load resistance in the short direction is provided by in situ concrete shearwalls and concentrically braced steel frames. In the long direction, the lateral resistance provided by the external raking steel frame is supplemented by more in situ shearwalls. “A pre-cast, double-tee flooring system creates a 15m wide column-free floor plate. This allows a high degree of future flexibility in the configuration of teaching and circulation spaces.”

The capping of the rail trench was completed before the station opening. An even greater challenge was the atrium roof structure. “The roof structure spans some 26m across the trench and is seismically isolated at one end,” Mr Austin says. “It is also required to support the large overhanging lift lobbies to the north and south of the atrium, as well as the main north/south access bridge. “There were two key geometrical constraints affecting the final design for the atrium roof structure — the first was that the atrium ceiling had to be a feature, and the second was the glazed perimeter clerestory. “A third constraint (not geometrical) was the cost. We went through several iterations, but I think we eventually arrived at a solution that achieves the architectural intent of the space in a cost-efficient manner.”

Mainzeal project manager Mike Turner says keeping the construction programme on track was his biggest challenge. “It’s 2000 tonnes of steel and, although the footprint isn’t big, the project has been very complex and intense. “I’m pleased that the whole process has gone very well. I’ve been very impressed by MJH Engineering as the main structural steel contractor. Their detailing has been excellent, and they have also managed the Just-In-Time deliveries of steel very smoothly. By subcontracting components of the fabrication to other Steel Construction New Zealand (SCNZ) fabricators, MJH provided a good solution to the project’s steel procurement and was still able to make its own contribution from Wellington.”

“We knew that D&H Steel in Auckland, Jensen Steel in Tauranga and Eastbridge in Napier could be relied upon because we all share the same high standards and experience when determining buildability solutions.”

Inevitably, there were complexities associated with the construction of such a building. The methodology was adapted to accommodate the key engineering elements which, in turn, determined the sequencing.

The Raking Frames: In the final analysis, the horizontal force is transferred into the floor diaphragm and redistributed to the raking frame. But there was an added complication. Because the beam that supports the flooring system is located inside the line of the raking frame, resulting in an out-of-plane torque, as erection took place a series of diagonal props back to the interior side of the building was needed to maintain the stability of the steelwork as it underwent deflections (see picture, page 31).

The Western Atrium bridges: At the western end of the atrium, the north and south elements of the building are connected by six 25m-long bridges. These could not be supported from below because of the presence of the rail trench structure. The bridges, therefore, are to be suspended from large atrium roof trusses. Only once the roof structure is in place and the hangers installed will the concrete topping for the bridges be poured.

Cantilevered Lift Lobbies: The cantilevered lift lobbies on both the north and south side of the atrium are 6m wide and overhang the train station below. They, too, are suspended from the atrium roof trusses.
However, the loads associated with this hanging structure were significantly higher than the loads of the six bridges. Moreover, it was not possible to defer construction of this portion of the building until the atrium roof structure had been completed.