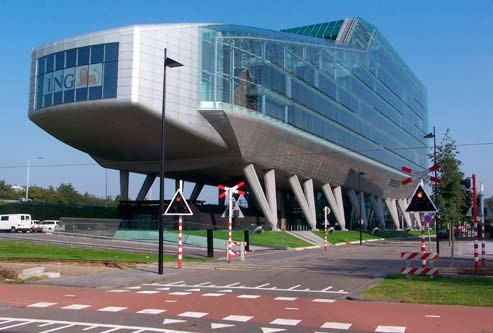 This is certainly what Internationale Nederlanden Groep, aka ING Group, did in 1998. They called in Amsterdam based-architects Roberto Meyer and Jeroen van Schooten — the upshot being the mind-blowing ING House built in Amsterdam’s business district of Zuidas. One of the more intriguing aspects of the building is the difficulty commentators have in describing it.

Wikipedia copies the ING web site and explains the structure as “a table on 16 angled steel legs”. Europe Real Estate refers to it as “like a gigantic elevated ship”. Popular Dutch culture prefers “Kruimeldief” or, in English, “The Dustbuster.” I think that suits admirably.

For Meyer and van Schooten, the building was their rocket to international stardom. Pictures of the stunning design soon graced magazines the world over.  If nothing else, the project shows what can be achieved when architects work in complete harmony with a client. The two groups had a joint goal — the best possible result. In particular, ING wanted something different, something that would not only define the company but make a statement to the world. Their architects provided just that. The building has become a landmark that delineates the entrance to the city and to the CBD.

The 5600sq m site provided its own challenges. It runs alongside a major highway and a railway. Given that ground level was below the highway, traffic noise, congestion and pollution all had to be taken into account, particularly in the upper floors that overlooked the traffic corridors. A double-skinned facade helped resolve many of these difficulties. The entire structure hangs on those 16 angled steel legs that are independent of each other. They are pinned to large concrete blocks buried in the ground in a manner used in bridge construction. The legs provide the bearers for floors that offer 20,000sq m of office space.

The building is 28m wide and 138m long. At its highest point it is 48m tall to accommodate 10 floors. It includes a 250-seat auditorium, a restaurant and more than 800sq m of conference rooms. The streamlined shape is sheathed in anodised aluminium and glass. Within the building there are also six inner gardens, each designed by landscape architect Michael van Gessel. Each has its own theme, and each is fully integrated into the building design.

The ground-breaking ceremony took place on November 16, 1999. Construction was completed by 2002 when it was opened in September by Prince Willem-Alexander. It is well worth taking a butchers the next time you are visiting the tulips in Amsterdam.