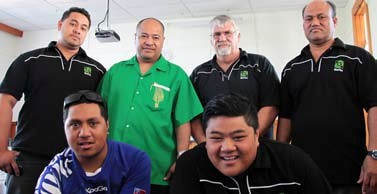 “There have been lives lost and 10 people remain missing. Housing has been destroyed, schools and infrastructure are damaged and there is major disruption to water and electricity. This is a serious event for Samoa, and one which the New Zealand Government is responding to,” Jackie Frizelle, soon to be New Zealand’s High Commissioner to Samoa, says. “$2.6M has been contributed to help with early recovery. Supporting these new plumbing graduates and their tutor to get to Samoa to start providing the technical support to restore Samoa’s water supply is critical.

“When the Christchurch earthquakes hit, Samoa provided aid to help us. It is fitting, and in the spirit of our nations’ friendship, that we now support Samoa by sending these pre-trades qualified people to work with the Samoan Water Authority restoring the water supply system.” One of the graduates flying to Samoa is Vinglouin Faleatua (Ving). A father of five with 14 aunts and uncles in Samoa on his mother’s side, Ving can’t wait to help out his extended family in Samoa.

“Before I came to WelTec to study plumbing I managed a tyre servicing business. The work was repetitive, and after a while I wanted some new challenges. I spent time remodeling a bathroom with a relative, and was hooked. It was easy to switch careers and now, as a plumber, to be able to do something new every day is really exciting.” Whitireia graduate Tufou Aitogi thanked the New Zealand Government for the opportunity to go to Samoa.

“We are going there to work hard. We are not there to muck around. It’s a great opportunity to put our skills into practice.” The graduates’ study was supported by the Tertiary Education Commission through the Pasifika Trades scholarship scheme launched in 2012, and the training was provided by Whitireia and WelTec.

As part of its aid programme, the Ministry of Foreign Affairs and Trade is funding the graduates’ travel and living expenses in Samoa.