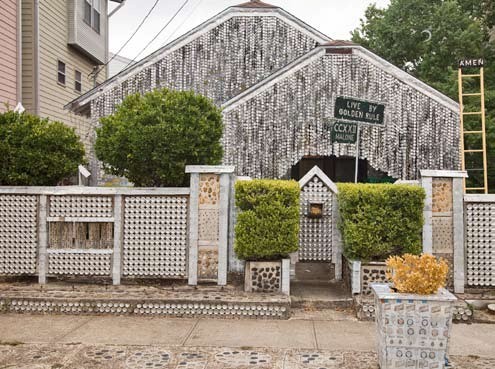 From 1968 until his death 20 years later, Milkovisch, a retired railroad upholsterer, emptied 50,000+ cans of beer and used the empties to clad his house, workshop, fence and mailbox. It’s not all beer cans. Milkovisch started out inlaying marbles, rocks, brass figures and metal pieces into concrete and redwood to decorate his gardenscape. However, eventually he turned to the house itself and began covering it with aluminium cladding — flattened aluminium beer can cladding. He festooned the eaves with chains and screens made of can tabs and cut-up beer cans. These caused the house to sing in the wind — as well as lowering his energy bills. ‘Sick of mowing the grass’ His yard had no grass. The entire front and back was covered in concrete and, naturally, was decorated with cans. When asked why he did it, John told all and sundry: “I got sick of mowing the grass.”

He never considered the decoration of his home a work of art, but simply an enjoyable pastime. His wife, Mary, who along with several neighbours, helped John empty the cans, observed: “He didn’t think anybody would ever be interested in it. He just loved drinking his beer and just loved being outside and cutting up the beer cans.” And that estimate of more than 50,000 cans comes from Ripley’s Believe It Or Not. That works out to a 6-pack a day for 20 years, with a few extra in the weekends. When asked if he preferred one brand over others, John just replied: “Whatever’s on special.”

Today, the Beer Can House is owned and operated by the non-profit Orange Show Center for Visionary Art. You can find out more about it at www.beercanhouse.org.