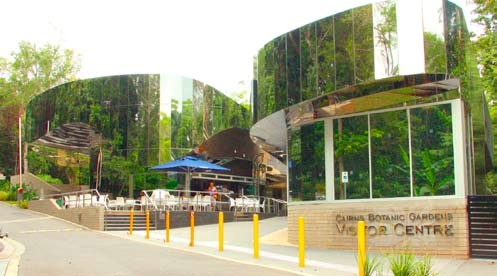 In June 2009 the Cairns Regional Council conducted a limited competition for the design of a new visitors centre for the Cairns Gardens. Among those invited to contribute were Charles Wright Architects (CWA). It was their contribution that best fulfilled the council’s desire for “a memorable piece of tropical architecture that would blend seamlessly into the surrounding environment”.

The site was constrained by existing paths, roads, easements, mature trees and a difficult gradient. This made the functional brief very tight. As described on their web site, CWA proposed a mirrored facade that would literally reflect the surrounding gardens. The building would have a “visual effect similar to the suit worn by the alien hunter in the original 1987 Predator film”.

The architects were remarkably successful in achieving a long, low, reflective building that blends seamlessly with the surrounding environment. Every aspect of the building is clad with mirror. In fact, Cairns’ bird watchers have expressed concern that some of their feathered friends might collide fatally with the mirrored facade while in flight. For humans it provides what is tantamount to a camouflaged gateway that opens to a pedestrian promenade linking the gardens with the adjacent Tanks Arts Centre. And it offers a year-round cool and dry zone for visitors, in contrast to the often hot, wet environment of the gardens. It houses a cafe terrace, information and exhibition space, plus offices for council staff.

Since its opening, the building has received much favourable comment in Australia and overseas. It has been listed among Australia’s top 10 buildings, and in November was declared Building Of The Year in the Commercial Construction $5m – $10m category at the Master Builders of Australia National Excellence Awards. It had already picked up the 2012 Eddie Oribin Award for Building of the Year presented by the Australian Institute of Architects.

One jury observed: “A courageous and radical departure from classic crafted and lightweight Queensland visitor centres, this alternative approach to environmental fit has clearly generated a potent sense of place and use of light. It exhibits outstanding working and visitor environments within a clear sustainability ethos.”