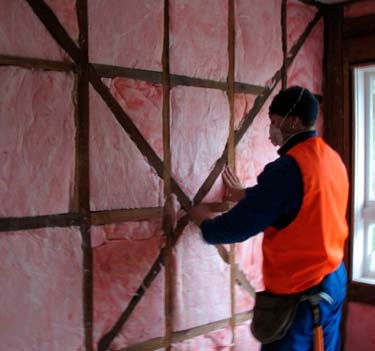 Beacon has already successfully trialled the advantages of wall insulation, along with other upgrades, through its Build Back Smarter project, and it has been a huge success.  “The extensive repair and rebuilding required in Christchurch presents an opportunity to include upgrades which will improve a home’s performance — we call this building back smarter,” Mr Collins says.

The Earthquake Commission (EQC) recently announced they would be giving home owners the opportunity to install insulation in areas exposed during earthquake repairs. “We congratulate the EQC on their decision to allow wall insulation to be installed during repairs, as home owners will see the benefits immediately, particularly as the weather gets colder,” Mr Collins says.

The first of 10 earthquake-damaged Christchurch homes has been upgraded through the Build Back Smarter project, including wall, ceiling and floor insulation, a heat transfer system and double glazing. This has resulted in a much warmer home for a Huntsbury couple. “Through Build Back Smarter, Helen and David Wells have noticed how much easier it is to heat their home and the impact this has had on their lifestyle,” Mr Collins says. “Previously the couple would heat their dining room/main living area with a woodburner and spend as much time as possible in this area while the rest of the house would remain cold. “Mrs Wells used to put on a down jacket to go into the lounge to play her piano. Following the upgrades, Mr and Mrs Wells have noticed warm, even temperatures throughout the house, and even some health improvements, particularly with regard to sinus trouble.”

The inclusion of wall insulation to the home added no extra time to the completion deadline, and was easier than expected. “The extent of the damage and the desire by builders to undertake work quickly and efficiently means that wall linings are often removed rather than repaired, creating significant additional opportunity for installing wall insulation,” Mr Collins says.

More than 60% of Canterbury’s homes were built before insulation was mandatory, and most of these will have no wall insulation whatsoever. “The greatest opportunity lies in installing wall insulation because it will make the biggest improvement to how the home performs, and is usually both inconvenient and expensive to install. “For these reasons, wall insulation is often only undertaken during major renovations — a once-in-30-year event,” Mr Collins says.

Beacon Pathway is an incorporated society committed to making New Zealand’s homes more resource efficient, healthier to live in and affordable. Christchurch’s Build Back Smarter project is a collaborative effort supported by the Energy Efficiency and Conservation Authority, the Christchurch City Council, Fletcher Building, the Ministry of Science and Innovation and the Christchurch Agency for Energy. Community Energy Action is assessing the homes and undertaking insulation and heating retrofits.