Home Apprenticeships Entries now open for Apprentice of the Year 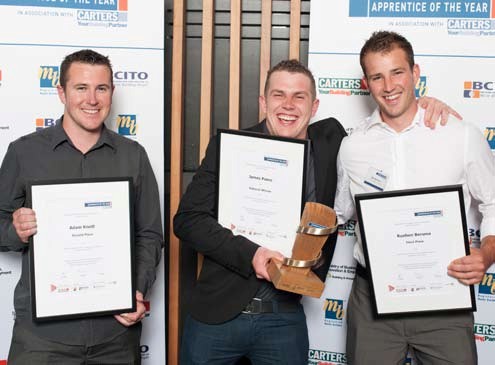 Apprentices are being encouraged to claim their share of more than $100,000 worth of prizes, by taking part in the Registered Master Builders Carters 2013 Apprentice of the Year.
Entries are now open for the competition, which provides a chance for carpentry apprentices to be recognised for their talent, skill and drive.

RMBF chief executive Warwick Quinn says those who enter have the potential to go a long way in the industry.
“Entering Apprentice of the Year is a great way to show your employer and those in the industry that you mean business,” Mr Quinn says.
“While not every apprentice can take home the title, there are a number of regional and national prizes up for grabs. You won’t know if you don’t give it a go. It’s a fantastic experience for all entrants.”

James Poore, winner of the 2012 competition, believes those who take part in the competition will be setting themselves up for a good career in the industry.
“I learned so much from taking part in the competition. It was a fantastic event, and people do take note when you enter. I know my title of Apprentice of the Year is going to help me out a lot with my career,” James says.

BCITO chief executive Ruma Karaitiana says now is a great time for young people to be getting involved in the construction industry.
“With the Government’s new incentive scheme for apprentices and their employees, we can expect to see a real influx of skilled young builders and tradespeople, and a new bunch of people ready to take part in Apprentice of the Year in a couple of years’ time,” Mr Karaitiana says.

Principal sponsor Carters will be supporting the competition for the ninth time this year, and chief executive Paul Bull says he is proud to be involved in the 2013 Apprentice of the Year.
“Being involved in Apprentice of the Year is something Carters is really passionate about. Giving back to our industry is important to us, and backing the apprentices who take part in this competition is a great way to support the future of our industry,” Mr Bull says.

Entries for the Apprentice of the Year competition are open from April 2 to June 13. For further information, or to enter the competition, go to www.apprenticeoftheyear.co.nz.
Apprentices, employers and those young people aspiring to be a part of the construction industry are encouraged to join the Facebook page at www.facebook.com/apprenticeoftheyear.