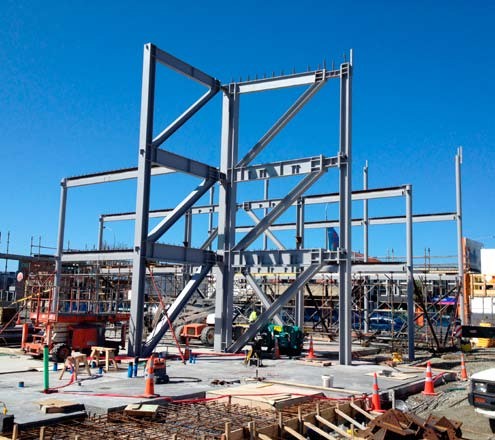 In Maori mythology, Ruamoko is first and foremost the god of earthquakes: Ruamoko Solutions, established in Christchurch in 2006, is a firm of consulting structural engineers specialising in structural design solutions that mitigate the damage occurring in buildings subjected to major earthquakes.

Research initiated by a post graduate student at the University of Toronto attracted attention from Ruamoko, as Mr Ramsay explains.
“In 2010, Nabil Mansour was testing his thesis that a shear link designed for an Eccentrically Braced Frame (EBF) could be replaced after a major earthquake,” Mr Ramsay says.
“His removable link featured a bolted moment endplate connection, which would allow easy removal and replacement on-site. Nabil’s link successfully demonstrated satisfactory levels of ductility, as well as an ability to contain the damage safely.

“Spurred by the Christchurch quakes, the Ruamoko team felt strongly motivated to carry out further research and develop connection design procedures for the link.
“We worked closely with Steel Construction New Zealand. SCNZ manager Alistair Fussell also engaged Dr Charles Clifton, Associate Professor of Civil Engineering at the University of Auckland, to help produce design guidelines based on the Canadian research but with adjustments for New Zealand standards and practice,” Mr Ramsay says.

The design and build contractor, Armitage Williams Construction, which has a reputation for applying creative solutions to its projects, decided to incorporate the new EBF technology in two new office buildings it wanted to erect on Christchurch’s Lincoln Road, hereafter referred to as Three35.
Director Ben Harrow was pleased with Jasmax Ltd’s architectural design, which included a 185-space car park building, kept separate according to the principles of modern urban design.
He stipulated that in the office buildings, the structure should be in steel to take full advantage of the latest earthquake damage avoidance technology.

Mr Ramsay says the principle is essentially similar to a fuse in an electrical fuse box. “The weakest link is chosen to yield in a ductile manner by way of special steel detailing. As it yields, it absorbs and dissipates energy from the earthquake and, thereby, protects the adjacent steel elements from being damaged.
“Thus, repair is minimised to the replacement of the bolted shear link — a vast improvement over what used to happen with earlier design systems when yielding was less concentrated, adjacent steel members were weakened and had to be cut out and replaced for the building’s structural integrity to be restored.
“Invariably there was extensive on-site welding, and the building’s return to use was delayed. Today, this can be avoided and the building promptly returned to full use,” Mr Ramsay says.

Pegasus Engineering Ltd won the sub-contract for the fabrication and erection of the steel. Production manager Brett Dodds gives his first impression of the Ruamoko engineering design: “At a glance it looked pretty straightforward, a simple K-frame design that the Pegasus fabrication team has done many times. But when we examined Ruamoko’s design closely, it raised questions about weldability that told us this was no ordinary old K-frame,” Mr Dodds says.

“Full penetration welding was required on 95% of the frames. This meant we would need to pay particular attention to the welding procedures and the sequence of operations, as well as distortion and shrinkage. Pegasus has proven experience in heavy welding, so we had no difficulty with the required welding procedures.
“Likewise, with the sequence of operations, the EBFs were comprised of floor beams, columns and braces which could each be fabricated separately and combined into sub-assemblies.

“The challenges that presented themselves involved the amount of shrinkage in the sub-assemblies and the distortion of the main frame assemblies after these had been fully welded.
“It was only by dint of on-the-job trial and error that we were able to predetermine length changes and pre-sets. As we progressed along this learning curve, we were able to up the tempo of our throughput while maintaining the highest levels of quality assurance.

“All the frames and their adjoining assemblies (columns & link members) were trial-fitted in the Pegasus workshop to ensure that the on-site fit-up would go smoothly. Once all the welding was completed, the final third party 100% ultra-sonic test and the visual weld examinations were carried out.
“Day after day our welders proved that they were at the top of their game. This was a very intense fabrication and welding project with many long hours for our teams, yet very few defects were detected and repairs were minimal,” Mr Dodds says.

Armitage Williams’ Ben Harrow was impressed. “We’re very happy with the design, and see it as the best way to build in an area where seismic activity can be expected, in Christchurch or any New Zealand city similarly prone to earthquakes. This kind of structure will last for at least the next 80 years,” Mr Harrow says.
Jasmax architect Richard Hayman says once the decision to go with steel was made, “it was logical that expressed steel elements should become part of the architectural design”.

Mr Ramsay says his company’s first priority as structural engineering consultants is to design buildings that give the people who work in them protection from drastic collapse.
“In recent times we’ve seen the technology make great progress in this direction, addressing the danger from fires, wind and, of course, earthquakes.
“Our second priority is to protect the economic life of a building, so that even after a violent earthquake it has the ability to recover quickly and return to business as usual.

“There are people who want to know if Three35 is a first for New Zealand, or even a first in the world. For Ruamoko, what’s more important is that other structural engineers, developers and building owners will be prompted to look closely at the technology we’ve used, and recognise the advantages it offers for new buildings and for the retro-fitting and earthquake strengthening of existing buildings.
“We leave medal honours to sport, and would be more than happy to share what we know with others who need to know,” Mr Ramsay says.