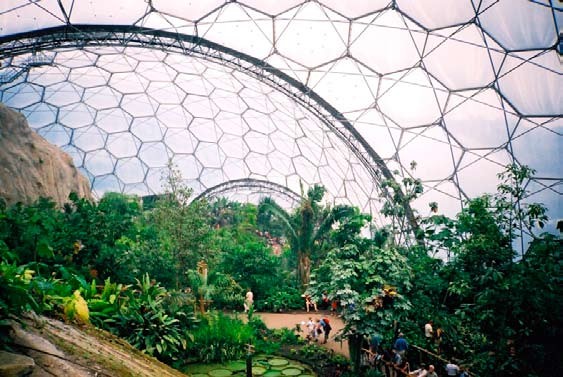 The world’s largest greenhouse is the brainchild of Tim Smit. He wanted a way of showing the connection between plants and people. The upshot was the Eden Project in Cornwall, England.

The complex at Eden is dominated by two vast dome-shaped enclosures. Each contains an artificial replica of a natural biome — a geographical community of plants and animals defined largely by its climate. Conditions within one dome replicate a tropical climate, in the other a Mediterranean environment.

The entire Eden Project is housed in a 160 year old exhausted china clay quarry. The ground is irregular, and domes were chosen to house the biomes because of the manner in which bubbles mould themselves to any surface on which they sit. The principal architect apparently got the idea while doing the washing up.

The steel frames of the domes are constructed from tubular steel (hex-tri-hex) formed into hundreds of hexagonal and pentagonal cells.
The cells vary in size up to nine metres across, and the largest are at the top of the structure that is essentially geodesic and, as such, completely self-supporting.
Most of the external panels are clad with thermoplastic ETFE. Glass was not used due to its weight and the potential hazard it posed.

Each cladding panel was formed from several layers of thin UV-transparent ETFE film, sealed around their perimeter, and inflated to create a large cushion. These cushions provide a thermal blanket for the entire structure. Any punctures are repaired by ETFE tape.
The ETFE plastic is dirt-resistant, with any residue washing off in the plentiful English rain. When required, external cleaning is done by abseilers.

The project was constructed as one of the UK’s Landmark Millennium Projects. It was designed by architect Nicholas Grimshaw, in collaboration with engineers Anthony Hunt and Associates. Construction was by Sir Robert McAlpine Ltd and Alfred McAlpine. It took two and a half years to complete, and was opened to the public on March 17, 2001.

In December 2010, the Eden Project received permission to build a geothermal electricity plant that will generate some 4MWe, enough to supply the needs of Eden and about 5000 households.

If you wish to examine the greenhouses close up, they have been accessible on Google Street View since December 2009. And fans of The Hitchhiker’s Guide to the Galaxy will wish to learn that, in 1981, the former clay pit provided the surface of the planet Magrathea in the TV series.