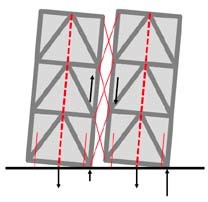 After the Canterbury earthquakes of 2010 and 2011, to undertake the design of a three-storey medical centre for construction in the CBD of Christchurch required considerable background research, an extensive review of the relevant engineering literature and a great deal of in-depth analysis.

There would be 5000 sq m of specialised facilities, including four operating theatres, patient bedrooms and urology, radiology, orthopaedics and women’s health clinics, not forgetting some 650 sq m of plant deck on the roof and a further plant room at ground level.

The client, Nobby Holdings Ltd, awarded the design to Alan Reay Consultants Ltd, Doug Latham taking the role of design engineer.
“Because of the type of occupancy, this building was considered an importance Level 4 structure, which is the emergency facilities standard — ie, it is designed to resist an earthquake 1.8 times stronger than a standard building can resist,” Mr Latham says.

In a paper presented at the Steel Innovations Conference held in Christchurch in February 2013, Mr Latham explained that to meet the design and performance requirements, the Kilmore Street Medical & Specialist Centre would utilise a post-tensioned steel rocking and dissipating system, representing the first application of steel PRESSS technology in New Zealand. (PRESSS stands for Precast, or in this case Prefabricated, Structural Seismic Systems, originally developed and tested in the United States.)

“The lateral load-resisting system consists of coupled, steel-braced frames (or steel “walls”), vertically post-tensioned by un-bonded high strength steel bars. The frames are able to rock during a significant seismic event, with the post-tensioning providing a restoring force that re-centres (pulls the building back straight).
“The structure implements an ‘Advanced-Flag Shape’ (AFS) system, where displacement-proportional and velocity-proportional energy dissipation mechanisms are combined in parallel to the re-centering contribution from the un-bonded post-tensioned bars.

“In this particular case, the two types of damping are provided by replaceable axially-yielding mild steel fuse-bars and High Force-to-Volume lead extrusion devices.
“The AFS system was developed and tested at the University of Canterbury under the direction of Associate Professor Stefano Pampanin. It is implemented here for the first time in real practice,” Mr Latham says.

The building floor plate is approximately 45m x 40m and consists of a predominantly steel structure. The suspended floors are comprised of steel-concrete composite slabs (ComFlor 60) with eight sets of coupled steel post-tensioned braced frames located around the perimeter to provide the lateral load resistance.

The building is clad with curtain-wall glazing, and the braced frames sit in a frosted glass enclosure so that they are incorporated as a feature of the architecture.
“The seismic resisting system consists of pairs of Concentrically Braced Frames (CBFs) coupled together. Each CBF is a single fabricated element, and is vertically post-tensioned to the foundation with two 75mm high strength Macalloy bars.
“The frames sit in a base ‘shoe’ which acts as a shear key under horizontal loading, and allows the frames to rock. The dampers, which dissipate the earthquake’s energy, are located at the base of the frames at the rocking interface and between the frames to provide coupling.

“One of the characteristics of rocking systems is that as the frames (or walls) rock, it causes the far edge of the frame to lift. If the floor is rigidly tied to the frames, the floor will also lift up, potentially damaging the floor and causing discomfort for the occupants.
“A feature of this design includes special detailing at the connection between the floor diaphragms and the seismic frames to isolate the floor from the vertical movements experienced by the frames as they rock, while still being able to transfer the horizontal earthquake loads,” Mr Latham says.

Even before the main contract was tendered, John Jones Steel Ltd was nominated as the steel subcontractor to assist with the design and buildability of the project, with its new technology. This ensured the ultimate success of the structural frame build and a seamless transition into the main contract with Fletcher Construction.

However, Christchurch’s rising demand for steel made it necessary to bring D&H Steel into the picture in a joint effort that combined the resources of the two fabricators, John Jones Steel having feet on the ground and D&H Steel boosting capacity.
John Jones Steel managing director Frank van Schaijik says their co-operation with D&H Steel on the project proved that New Zealand steel constructors can achieve capacity and performance with none of the risks that outsourcing to a foreign supplier often involves.

D&H general manager Wayne Carson agrees. “It’s a best of both worlds approach to ensure our industry can supply the market without the need to source from offshore,” he says.
“It’s all about local responsiveness, horsepower to meet tight project deadlines and providing quality in a market that is demanding new levels of QA and accountability.”
In the D&H Steel workshop, where some of the more intensive fabrication and welding was done, advanced QA procedures provided the engineer with certainty as to both material and workmanship.

The project requirements included:
• Full material traceability, with each and every element identified by individual mill certificates and heat numbers to demonstrate compliance to standards
• Detailed Factory Production Control System to track and record material details of each and every element
• 100% welder traceability, including full weld-mapping and a comprehensive Welding Quality Management System
• Extensive inspection regimes under the control of the welding supervisor.

At D&H’s integrated plant in Henderson, Auckland, the welding supervisor is Heath Johnston.
“On each of the 16 brace frames, the design engineer specified 195 welds, both full and partial penetration,” Mr Johnston says.
“Welding personnel had 100% of their work subjected to ultra-sonic tests for the first five welds. The rate was then lowered to 30%, with critical welds remaining at 100%.
“Currently, the industry standard is only 15%. The high standard that we are working to involves welder traceability, which we achieve by keeping Weld Maps recording who did the weld, what type, and confirming that it passed inspection.

“Our rejection rate, requiring that the weld be re-done, was extremely low. Our welders become highly competitive because they take pride in their craftsmanship.”
Southern QA Ltd is the New Zealand accredited laboratory responsible for testing the welding done on the steel structure.
Senior welding inspector and welding consultant Brendon Isherwood says when he visited D&H in Auckland he was very impressed by the company’s capabilities, by the management team and by the skill and attitude of the welders.

“They are very close to achieving, and certainly will achieve, the ISO 3834 standard. When welding criteria are raised to this level, you always get the best results from welders who buy in because they want to participate,” Mr Isherwood says.
“I’ve been to China to review and check their capabilities, and concluded that they can do the work but, because they have huge capacity, they feel compelled to move it by lowering the price.

Doing things as cheaply as possible usually results in a dropping of standards and a consequential loss of output quality.
“That is the critical point of difference from the New Zealand-produced structural steel — we comply with higher standards, with all that this means in terms of reliability, traceability and accountability.
“It’s more than just a matter of passing ultra-sound testing — it’s an entire management system designed to deliver quality assurance from source to end-user, for the benefit of the very people who will work in the buildings that are built.”

Fletcher Construction project manager Eugene Duggan paid tribute to one of the key factors behind New Zealand’s strength in construction.
“It was important for Fletcher Construction as the main contractor to be able to have a close working relationship with our consultants, clients and subcontractors. We have all worked together to ensure that this cutting edge building succeeds,” he says.