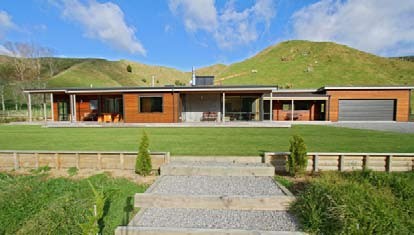 Paul Jones of Paul Jones Construction believes his ability to cater to his client’s rural lifestyle ultimately won him the New Homes $450,000 – $600,000 award in the Registered Master Builders PlaceMakers 2012 House of the Year competition.

After winning a number of Gold Reserve Awards and making it to the national finals in the past, Mr Jones says for his Eltham home to be named the best in New Zealand was “incredible”.
“We’re very proud of this build — it’s a beautiful home but also very functional,” Mr Jones says.
“I think this home stood out because it really catered to the lifestyle of the owner. We put a lot of thought into how we could accommodate the fact that the owner’s site was on a farm.”

Mr Jones says the biggest challenge of the build was the preparation.
“The site was actually cut into a hill and levelled out, so we ended up doing all the site prep a year prior,” he says.
“We built up the foundations by about two metres, had it engineered and certified, and then had to let it settle for a year before we actually built on it. To say the least, a lot of prep went into getting this home right!”

The judges called the home a “fantastically-built working farmhouse” in a magnificent hill setting.
“This incredibly considered design accommodates practical elements, such as a large porch veranda and wet areas conducive to rural living, allowing this beautifully crafted home to remain pristine and enjoyed by its owners,” they said.
“This is a home to be proud of, and was the deserving winner of the category.”

Mr Jones says he continues to enter House of the Year because it’s the best marketing opportunity a New Zealand builder will find.
“If you’re thinking about entering the competition, definitely go for it. You’ll learn a lot and get an appreciation for some of the builds happening around the country,” he says.
“I was blown away by some of the houses in the competition. You tend to be a little bit isolated in your own patch, so the competition provided a great chance to see top builds from around the country.”