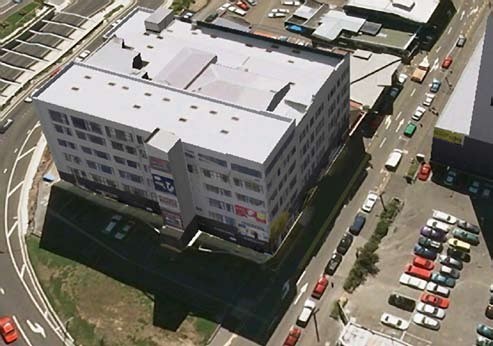 The McKenzie Building at 222 Willis Street, Wellington, has undergone earthquake strengthening in preparation for a new lease of life.

Built in reinforced concrete during the 1930s as a department store with warehousing, additions were made in the 1960s that now comprise the current structure of four buildings surrounding a four-storey atrium.

Although they are adjoining, they are structurally independent, and have been given a predominantly structural steel seismic strengthening retrofit.
They will now be leased by WelTec as off-campus student accommodation, with budget short-stays during the summer university break.

Some limited strengthening work was carried out in 2010 when it was decided to bring the building up to approximately a 40% equivalent of the Building Code seismic strength. This put the McKenzie Building just above the minimum required by Wellington City Council.

Since the floor levels had all been built to the same height, it was deemed expedient to tie all four buildings together by bolting adjacent concrete beams across the coincident floor plates, and thus leveraging the relatively higher strength of the 1960s portion of the building.

The current strengthening was motivated by the new tenant, WelTec, who wanted to bring the building up to 80% of the New Building Standards seismic design capacity. This complements the existing structure by adding new bracing systems that increase the overall seismic resistance and, thereby, improve safety.

Dunning Thornton design engineer Gareth Alley says several bracing options were considered.
“In this case, steel K-brace frames were selected because of their relative stiffness, which complements the low drift capacity of the existing frames. Steel braces are also relatively open and help to avoid creating obstructions to windows and interior spaces.

“The K-braces were made up of relatively heavy members (such as 350WC230 columns and 530UB82 beam sections). Where possible these have been detailed for bolted connections in the steelwork erecting. This was particularly important for the two frames inside the atrium space, as these have to fit in and around the existing concrete frame structure.”

Mr Alley says one of his particular challenges arose from having to base the initial design on archived documentation.
“Site measurements were constrained because the buildings were in use at the time. As the interior was progressively demolished, we discovered that in many instances, the built structure differed from the original drawings, necessitating many significant changes to the proposed new design.

“This is often the case when embarking on a strengthening project. When discrepancies come to light, usually at the laser site-measuring phase, it’s vital that there is a close working relationship between the main contractor, in this case Arrow International, Dunning Thornton as the engineers and Stevensons as the fabricator and erector, who also detailed the shop drawings.”

Arrow International’s Robb Noble was the main contractor’s senior project manager on the McKenzie Building.
“Our first priority was to gut the building,” Mr Noble says, “so that the engineers and Archaus, the architects, could understand what they had to work with. Only after much surveying with theodolites and lasers were Dunning Thornton able to adapt their design, retaining what was wanted from the old structure while integrating the new.

Their design engineer then referred his drawings to Stevensons who, in turn, produced the shop drawings needed for fabrication. With limited scope for change, Archaus brought inventiveness to the layouts and kept the strengthening design habitable as it evolved.

“As the term ‘retro-fitting’ implies, it’s building backwards,” Mr Noble adds. “We have to adjust our mindset to the idea that nothing is straightforward. For example, the drag beams that were ultimately fitted to the two internal K-braces were put into the building before the K-braces.
“In fact, the Stevensons riggers took a crane delivery of each 15m 1-tonne beam through a window and manhandled it into the building, sometimes up stairs. They would attach the beams to the underside of the floors, propping them at one end with shore loadings (heavy-duty scaffolding) and, at the other end, with a temporary Square Hollow Section frame. This provided millimetre perfect positioning of the drag beam connection flanges, pending the installation of the K-braces.

“Installing the drag beams ahead of schedule opened the floors for other trades to continue with the fit-out walls and the services. The key to the success of this project was planning and, hand-in-hand with that, communication.”

Early morning traffic in the capital meant an even earlier morning start for Stevensons. Their workshop is in Tokomaru in the Manawatu, so each steel delivery started on the road south at 3am. Because access to the site was tight, parking a loaded truck could be a problem, so rapid unloading was in order. The aim was to get the truck back on its way up north by 7am.
Stevensons senior project manager Dave Hislop says with this project they found that build and install were often at opposite ends of the construction continuum.

“On the one hand, the external K- brace we assembled horizontally by floor, each 20m long by 6m wide. That’s how it was delivered through the streets of Wellington and erected, floor by floor — a total of 36 tonnes in just six main lifts requiring 10 days on site (see image bottom of opposite page).
“On the other hand, the internal atrium K-brace was delivered in 110 component parts, shorter sections that were small enough to be lowered into the centre of the build. This required the 100-tonne mobile crane to be equipped with a 17m 40°-offset fly to reach the top of the light well through holes in the atrium roof. Each member was lowered to the 12 previously installed drag beams. Fitting to the 750 splice plates was like keyhole surgery on a giant scale.

“On site, safety was paramount,” Mr Hislop says. “Our men had to watch out for each other, with holes in the roof and holes in the floor and also around the four-storey high light well. But because all the steel had been trial-fitted in our workshop, we knew that the load-bearing ends would fit perfectly on site. It was gratifying to see all the bolts in the K-brace frames fully tensioned, with no gas cutting marks, and the neatness of the transitions in the columns (350WC to 200WC) and the diagonals (250UC to 200UC).”

So what will it all look like when finished, especially inside? The visuals shown have been provided by Greg Shadbolt, an Associate with Archaus Architects.
He explains: “There are 285 student rooms in total, typically 10 to 12 sq m per bedroom, all with kitchenettes and bathrooms. The studios are slightly larger, while the two- and four-bedroom flats have living areas as well. On the ground floor there is an events area with a display kitchen, a cinema area, plus an indoor/outdoor BBQ area.

“The idea was to express both the existing and the new structure in an honest fashion, with the steelwork adding another narrative to the building’s history. I think people inherently like to see how a building has been put together.”

In Wellington, they also like to feel assured that because modern seismic science and engineering have been combined with sound construction techniques and materials, they can be confident the McKenzie Building will reduce their life safety risk in the event of a serious earthquake.

The official estimate is that there are 470 buildings in Wellington that are earthquake-prone — meaning they are less than 34% compliant with the Building Code.