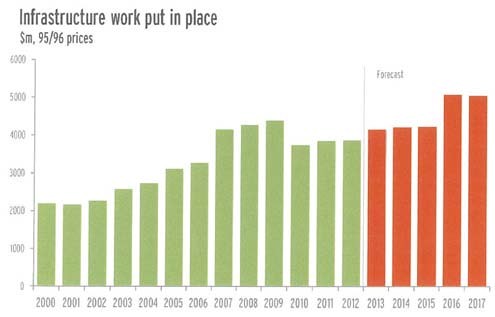 The New Zealand economy is now in a sustained upturn, and GDP growth for the next five years is forecast to be around 3% per annum on average. This is in stark contrast to the average 1.3% GDP growth per annum over the past five years.

Nett migration figures, which have been in the negative for the past two years, are now forecast to swing to a nett increase of 8000 to 10,000 people per annum for the next five years.
These key indicators are reflected in the Infometrics graphs at right.

This forecasts just how rapidly the construction industry’s workloads will increase, and that by 2014-15 will have exceeded the previous peak reached in 2007.
We are quite obviously facing a dramatic increase in demand, particularly in the Canterbury and Auckland regions. The need for skilled labour to be trained is imminent, and it’s hardly a surprise that carpentry apprentice numbers have jumped by 20% already this year.

This strong growth in apprentice numbers is expected to continue over the next three years, and will help us deal with the increased workload pressures.
Undoubtedly, training our current tradespeople and especially the LBPs in supervisory skills will be essential in dealing with this growth in a planned and considered way.

Some polytechnics offer classroom-based supervisor training which is probably better for lesser-experienced tradespeople.
The BCITO offers a very good National Certificate Supervisors course which is self-paced, computer-based, and can be completed in three to nine months, depending on the time put in.

This qualification covers modules such as decision making, job planning, conflict resolution, understanding work and administration procedures, managing other trades, and providing guidance and motivation to others.