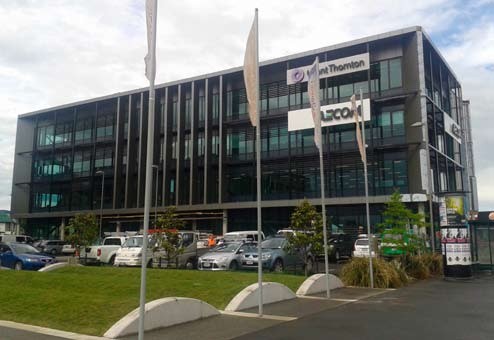 Originally designed prior to the Canterbury earthquakes, the four-storey building was to have had concrete shear walls but, following the quakes, these were replaced by Eccentrically Braced Frames (EBFs) with re-movable active links. Engineering consultants Structure Design were appointed to the project, and worked closely with Steel Construction New Zealand on the changed structural design.

Jon Haagh, a director at Structure Design, explains how the design came to include Buckling-Restrained Braces (BRBs).
“The screw-piling that had been completed before the quakes needed to be confirmed by the piling contractor. At first it seemed that significant additional piling would be needed.
“But having worked on another project where BRBs had been proposed, we were able to recommend them to Calder Stewart. All we needed for the existing piles to become usable were some heavy foundation beams. Additional piling was unnecessary.”

Some background on BRBs
BRBs were first developed in Japan in the late 1980s and appeared in the United States after the Northridge earthquake in 1994. They are now accepted in America and their design is regulated by current standards, but they are still relatively new to New Zealand construction.
Consisting of steel cores inside concrete-filled casing, they are designed to yield reliably in both tension and compression, taking advantage of the ductility of steel to dissipate seismic energy up to a pre-determined level without buckling.

Beyond this level, the BRB is designed to yield like a fuse, leaving the main gravity components of the building — its columns, beams and floor slabs — isolated from damage.
This is a significant improvement over a conventional bracing system, in which braces tend to buckle in compression. The consequent damage to the building often leaves owners reluctant to embark on expensive repair.

By comparison, Buckling-Restrained Braces may not even need to be replaced, or if they do, it’s not expensive to replace a fuse.
“The BRBs specified were the proprietary brand of StarSeismic LLC in Utah,” Mr Haagh says. “The company has conducted multi-million dollar test programmes in order to be able to calibrate each size of BRB to a consistent standard. With design and quality assurance now governed by United States standards, it’s much more convenient to order BRBs ready-made than having to design them from scratch.
“The building is modelled in ETABS (Extended Three-dimensional Analysis Building Systems) and the brace sizes are adjusted in the model until we reach a convergence between force and capacity.

“The information on lengths and forces is then provided to StarSeismic, who review and recommend adjusting the stiffness factors. The revised data is then inputted to ETABS and analysed again, and the process is repeated until the stiffness factors don’t change.
“In conventional brace design, the size of the brace is typically based only on its compression capacity. As a consequence, the brace is larger than would be needed if it were a tension-only design. Furthermore, the surrounding structure (the columns and beams) also end up being larger.
“However, with BRBs the tension and compression capacities are equal, and this enables the structural engineer to design a brace that will yield at a pre-determined level of stress.
“Knowing what this is, the engineer can design the surrounding columns and beams to be comparatively but not excessively stronger, so that the brace yields before they are damaged. It’s a more efficient approach that allows safety and economic benefits to work together.”

“Shipping from the United States was straightforward. We opted for the Star-Seismic Wildcat (welded) because it accommodates minor onsite adjustments readily, making it quicker to install than the Wildcat (bolted). It was not necessary to wait for the dead load effect before the final weld-off,” Mr van Herel says.
“We’ll be using StarSeismic BRBs in a second Hazeldean project, this time a six-level car park with 499 spaces. It will have offices and/or retail outlets at ground level.”