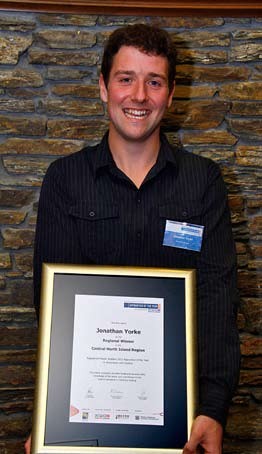 Jonathan Yorke was “stoked” when his name was read out as winning second place at the Registered Master Builders Carters 2013 Apprentice of the Year.
The 22-year-old from Palmerston North, who took out first place in the Central North Island region in September, has wanted to pursue a career in building for as long as he can remember.
“I wasn’t expecting a national placing at all, it was such a surprise,” he says. “It was a really tough competition. There was a lot of great talent there, and there was no way of telling which way it was going to go.

The nine national finalists were put through their paces over two days of the national competition in October, each undergoing a 45-minute interview with the judging panel, followed by the practical judging component in front of friends, family and the public.
Finalists were allocated five hours to build a children’s playhouse, which was gifted to a local charity on completion.
“The practical component was pretty challenging. I had never used shadow clad or rusticated weatherboards before, so I was a bit taken by surprise with the new materials. I don’t think any of us had a clue who would win the competition.”

Jonathan was inspired to enter Apprentice of the Year after one of his workmates took out second place in the Central North Island region in 2010.
“Ever since I saw one of the guys I worked with compete in Apprentice of the Year, I thought it would be something I’d like to have a go at. It looked like a great opportunity, and the prizes are amazing — that was definitely a drawcard!
“The competition gave me the opportunity to see how I compared to other apprentices around the country. It’s really hard to know how good a builder you are in comparison to your peers, and being able to judge where I stand is really valuable.”

The judges said Jonathan performed extremely well, both in his interview and during the practical component.
“Jonathan impressed us with his passion and enthusiasm in his interview, and his detailed technical knowledge of his submitted project,” they said.
“Throughout the practical element, Jonathan’s technical prowess shone through in the way he paced himself according to the specific requirements of each task.”
Jonathan is looking to continue bettering his skills and making his way up the career ladder.
“I’m really happy with where I am at the moment, which I know can be quite rare in a working environment. I’d like to keep working here, and make my way through the ranks to eventually become a partner at Arnott & Arnott,” he says.
“After Apprentice of the Year, I’m pretty sure most things are within my reach if I work hard enough. I’d really recommend other apprentices enter the competition and just go for it — you have absolutely nothing to lose.”