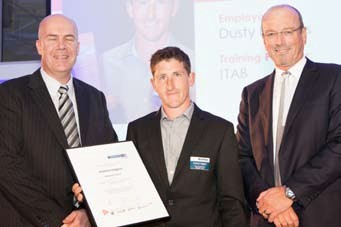 Andrew Higgins was rapt to have taken out third place in the Registered Master Builders Carters 2013 Apprentice of the Year.

The 23-year-old from Nelson, who took out first place in the Upper South Island Region last August, says it was a tense moment before the national winners were announced in Auckland in October

“I was pretty proud when my name was read out, but probably more relieved. There’s a lot of pressure when you’re sitting there waiting for the placegetters to be announced,” he says.

“During the national competition the judges give no indication as to where anyone stands, so until the winners are announced you just have no idea. It’s anyone’s game.”

The nine national finalists were put through their paces over two days of the national competition, each undergoing a 45-minute interview with the judging panel, followed by the practical judging component in front of friends, family and the public at The Cloud on Auckland’s waterfront.

After wanting to be a builder for as long as he could remember, Andrew took up a pre-trade course at NMIT before starting an apprenticeship with Dusty Builders in Nelson.

“I entered Apprentice of the Year because I wanted to prove to myself that I have what it takes to be among the best in the country — I wanted to use it as a benchmark,” he says.

“I saw a colleague of mine take out the Upper South Island Region a couple of years ago, and the recognition he got from peers, employers and potential employers was further encouragement to enter. The prizes aren’t bad either — not having to buy tools was a definite plus!”

The judges said Andrew was a pleasure to interview, and he demonstrated a strong building skillset.

“Andrew was professional in his interview, and had an interesting project — a cedar-clad house, which he talked knowledgeably and keenly about,” they said.

“His attention to detail and accuracy in his practical work was excellent, and that showed through in the level of his workmanship during the practical judging.”

Andrew says Apprentice of the Year was a valuable learning experience, and he thinks all apprentices should get involved and take advantage of it.

“What I found particularly valuable in competing in Apprentice of the Year was meeting so many different people — judges and apprentices alike. General pointers and comments from people in all stages of their building career taught me a lot about what to expect and different building experiences,” he says.

“I would tell any apprentice thinking of entering the competition to do it — don’t even hesitate. If you don’t win then you don’t win, but you’ll come away a better builder. Take advantage of it.”

The Apprentice of the Year competition is made possible thanks to principal sponsor Carters, the Registered Master Builders Association, the Building and Construction Industry Training Organisation (BCITO), and supporting sponsor the Ministry of Business, Innovation and Employment (MBIE).

Entries for the Registered Master Builders Carters 2014 Apprentice of the Year competition open on Tuesday, April 1.