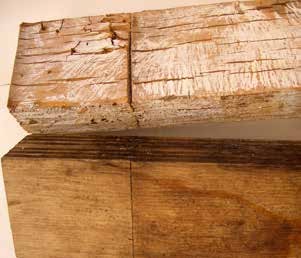 An engineered wood product that has the potential to transform construction has been included in the New Zealand Building Code. Laminated beams made from glued veneers of radiata pine are well known for their strength, stability and uniform sizing. Now improved durability can be added to the list.

Laminated Veneer Lumber (LVL) treated with Azotek, a novel product developed by New Plymouth-based Zelam Ltd, has been included in the New Zealand Building Code as an acceptable solution for internal framing.

“This is a world-first,” Zelam marketing manager Noel Coxhead says. “It essentially makes wet solvent treatments for LVL and plywood obsolete, and opens the door to much wider use of LVL framing in construction. “LVL is the key to precision construction using wood. But because of the well-known difficulties associated with wet solvent treatment of LVL, wood processors have been reluctant to go down that track,” Mr Coxhead says.

“It is difficult to get traditional treatments to penetrate the glue layers that bond the layers of LVL and plywood. The liquids involved also affect the dimensional stability of the finished product — which needs to be dried after treatment. “In contrast, our new treatment takes place during manufacture, so the finished timber is dry and ready for use as soon as it rolls off the production line.

“Because the treatment compounds are present from the surface to the core of the timber, it can be drilled, sawn and notched during construction without any loss of integrity or need for re-treatment.” Azotek-treated LVL has been available on the New Zealand market for more than 12 months, enjoying a steadily growing market share from designers and builders seeking precision wood products.

Its first commercial use was in Christchurch’s cardboard cathedral, where LVL beams were used for the main structural elements. But despite having Standards approval as a treatment, the previous lack of formal Building Code approval has been a barrier to the wider use of Azotek-treated LVL, according to Nelson Pine Industries (NPI) Australasian sales engineer Andrew van Houtte.

NPI has been producing Azotek-treated H1.2 LVL since 2012. Because it is a dry process, Mr van Houtte says treated beams have precise tolerances, adding to the dimensional stability that LVL is known for.

“To my mind Azotek is the best treatment on the market. In a technical sense it is better than anything the industry has ever seen — exactly the right amount of chemical is applied and it penetrates throughout the product. “It takes durability to a whole new level, and it also has great environmental and health and safety credentials.”

He says most of the LVL produced by NPI is used in common structural applications, such as beams, rafters, joists, lintels and bearers. Mr Coxhead says Azotek is made up of two fungicides that are widely used on food crops, but are new to wood treatment — triadimefon and cyproconazole — plus bifenthrin, a standard wood treatment insecticide.

“Finding suitable fungicides was a long journey for Zelam. We had many setbacks. Not only did the active ingredients have to be fit-for-purpose, they had to be readily available and affordable,” he says.

“Azotek is the only combination that met all the essential criteria. Having two fungicides in the mix means it provides broad spectrum protection against rot and decay organisms, and a barrier against selection for resistance.”

Before Azotek was approved as an H1.2 treatment for LVL it was tested in rigorous trials by Scion and in-house by Zelam. These were designed to determine Azotek’s performance in conditions designed to simulate what happens when water leaks into a wall cavity.

Although Azotek-treated LVL has New Zealand and Australian Standards approval for H1.2 treatment, it is sold only in New Zealand because the H1.2 standard does not apply in Australia. Trials of Azotek H2 and H3-treated LVL and plywood are now underway, and Mr Coxhead says these are looking very promising.

H2 treated framing is widely used in Australia, because this standard of treatment provides termite protection. When approvals come through for Azotek H2 and H3-treated LVL and plywood, these are likely to be well received by wood processors and builders on both sides of the Tasman.

“But the bigger prize is likely to be the United States, where a lot of engineered wood is used in housing construction. Already wood processors there are showing a lot of interest,” Mr Coxhead says.