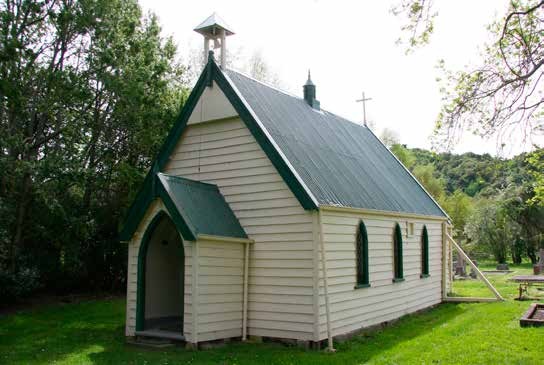 Christchurch’s Anglican Cathedral and Catholic Basilica were not the only Canterbury churches to suffer damage from the current earthquake swarm. The ecclesiastical damage extends throughout the province.

In South Canterbury a host of small churches populate the valleys below the Alps. Each responded to the quakes in different ways.
The oldest, St Anne’s in Pleasant Valley, rode through the entire episode unscathed. Woodbury’s St Thomas suffered minor damage, while Mt Peel’s Church of the Holy Innocents was shattered.

St Anne’s — originally St Ann’s — is the oldest church in continuous use in South Canterbury. It is tiny. It is wooden.
It was built in 1863 to serve the needs of the small but thriving community centred around felling native forest. Volunteer labour threw up adzed rafters to arch over kahikatea stud walls filled with a cob of clay and chopped tussock. Black matai was used for the floor planks. It was originally roofed with totara shingles.

The building’s completion was celebrated with a dance. The following morning the hand-adzed totara pews were placed inside.
Ten years after completion it was noted that the altar end was slowly subsiding. A proposal to relocate the building to Geraldine to serve as a Lady Chapel at St Mary’s met passionate resistance. Instead, large river boulders were placed beneath the building. They are still there today.

When the timber in Pleasant Valley was exhausted, the community scattered. Gradually the church fell into disrepair and, finally, local families stepped in to save and restore it.
The last and most comprehensive restoration was undertaken in 2005. At that time the cracked cob and clay plaster of the walls was replaced with a mix of straw and clay, and finished with a lime wash.

As a result, the building is in great shape today. The structure sashayed through all the earthquakes with nary a crack nor a board displaced.
As at Pleasant Valley, a small settlement grew up at Woodbury also based around sawmills active in felling the Waihi Bush. When a church became needed, a similar wooden church to that at Pleasant Valley was erected.

This time totara boards were used to sheath the walls but, again, a clay cob was used to fill the walls although, on this occasion, they were lined with timber inside. The building was completed in 1879 and dedicated to St Thomas.

Unlike Pleasant Valley, the settlement of Woodbury not only survived but grew. The need came for a new, larger church. World War I intervened but in 1925 a Chancel, Sanctuary and Tower of a new building were completed using stones garnered from local paddocks, supplemented by concrete. The builders were two locals — Oswald Scott and Bert Cooling.

However, it wasn’t until 1937 that a new Nave was eventually added, built as a memorial to Howard and Eleanor Tripp by their children.
Two features make this church stand out in South Canterbury. One is its magnificent stained glass windows. Three are the work of English artists, Veronica Whall and Joseph Nuttgens, disciples of England’s Art and Craft Movement.

The second feature is the elaborate carving of Frederick Gurnsey within the church. His work had also decorated Christchurch’s Anglican Cathedral.
Despite its rigid structure, St Thomas’ suffered little damage in the quakes. Its stained glass windows survived intact. The main recommendation of a post-quake engineer’s report was to reinforce the Chancel, which has now been completed.

With the main Anglican church in Geraldine, St Mary’s, closed due to quake damage, St Thomas’ currently serves the needs of those parishioners who worshipped there.
The situation of the Church of the Holy Innocents at Mt Peel will be looked at in a later issue.