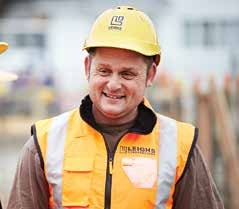 The reconstruction of Christchurch following the earthquakes is now focusing the spotlight on the shortage of skilled construction workers in the city. This demand for skilled labour was identified in a recent Grant Thornton International Business Report which found that 48% of New Zealand’s small to medium sized businesses were either pessimistic or very pessimistic about being able to attract sufficient skilled labour to be able to tap in fully to the economy’s strong growth.

Yet positions such as project managers, quantity surveyors, site managers, supervisors, leading hands and qualified carpenters are in constant demand within the company. “We have secured some considerable landmark projects which complement our already strong portfolio of work,” managing director Anthony Leighs says. “We have some fantastic projects on the go, such as the $80 million Cashel Square Stage 1 project in the CBD, and the Burwood Hospital Redevelopment project. “These types of projects present the once-in-a-generation opportunity for those who are seriously committed to growing their career, to become involved in the construction of a significant proportion of the central CBD’s rebuilding projects.

“Great projects reward exceptional people who can provide spectacular outcomes. We are in the position to be able to offer them an amazingly varied and exciting range of work which will extend their horizons and capabilities, and we are constantly on the look out for such appropriately skilled staff.” He says Leighs has tapped the national market for candidates and is keen to attract professional level staff who may not expressly be looking for a move. “The reality is that there are some phenomenal opportunities right now. We are a company which is following a philosophy of planned and structured growth, with each step of our development carefully considered and approved by our board. We are not in this for the short haul, but for the duration.”

Leighs Construction had existed for 16 years prior to the earthquakes, managing director Anthony Leighs carefully building an increasing turnover reflecting a growing breadth of projects for the firm, not only in Christchurch but as far south as Scott Base in Antarctica. But the firm’s core work changed radically from its construction focus immediately after the September 4, 2010 earthquake.

However, propping and stabilising buildings soon gave way to a major role in demolition work (the company formed a joint venture with a leading American demolition company for a period) and rebuilding work, and Leighs’ workforce soon soared. When advertisements for appropriately skilled local staff were unsuccessful, Leighs spread the net wider to encompass New Zealand. Leighs Construction human resources manager Jess Senior went to the Philippines in late 2012 to explore the potential there, and so began a successful recruitment stream, particularly of skilled carpenters.

Applicants continue to be rigorously interviewed and trade tested by Leighs site managers and then settled on fixed term contracts in Christchurch. But still the lack of qualified professional leadership remains. “We actively support internal development, with about 10% of our workforce being trainees, including carpentry apprentices, and quantity surveyors and construction management cadets. We also have a strong pool of highly talented individuals who have moved up the ranks within the company,” Mr Senior says.

“A number of our site managers started with us as carpenters, and were subsequently promoted to supervisor, then site manager. There are a number of staff who have also followed a similar path in different careers.” Mr Senior says Leighs prides itself on being dynamic and taking the lead in the construction industry, in thinking outside the square and delivering solutions through great people and strong processes.

The company cites its current key projects as being indicative of the range and scale of its portfolio of work. Squarely at the top sits the Burwood Hospital Redevelopment, the joint venture project with Cockram Corporation. This is a milestone project for Leighs, with a two-year programme of work having started earlier this year.

The result will be a new state-of-the-art health facility for Canterbury’s older people, incorporating three three-storey ward blocks for up to 230 patients, plus clinical support services such as radiology and physiotherapy, and an outpatient clinic catering for up to 80,000 people annually. Cashel Square Stage 1 in the Christchurch CBD is another new project that has just begun. It is one of the first new and ultra-modern high-rise buildings in the heart of the new city, in

Hereford Street adjoining the Re:START mall precinct. It will be completed in September 2015. Leighs is also currently completing the Christchurch City Council’s new visitor centre in the Botanic Gardens, the Blue Skies Campus Development at Rangi Ruru School, the Hub at

Hornby Mall Stage 1, an extension to the mall which will be completed this July, the new I-Sight day surgery eye clinic in Merivale, Stranges Building at the corner of Lichfield and High Streets, and the redevelopment of Mainfreight’s main warehousing and freight handling terminal at Sockburn.