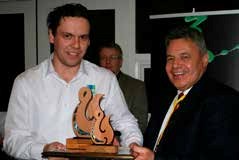 June has been a whirlwind month of celebrations for BCITO’s newest business group — Specialist Trades. Apprentice awards in all industries covered by the business group were attended and/or organised by BCITO.

The inaugural NZ Painting & Decorating Apprentice of the Year awards were held in Dunedin in June as part of the Master Painters New Zealand annual conference.

Painting & Decorating apprentices who were outstanding performers at their block course during 2013 were:

The BCITO Flooring Apprentice of the Year Awards were held in Auckland in June at the Ellerslie Event Centre to recognise and celebrate apprentices who were high achievers in 2013.

The industry turned out in force for a night to be proud of. More than 130 attendees enjoyed the company of like-minded flooring folk and shared in applauding the best performers.

The top flooring apprentices for training undertaken in 2013 were:

Stage One Apprentice of the Year: Nathan Fell, Harrisons Carpet One, Taupo

Guest speaker at the event, Sir Brian Lochore, entertained and motivated the crowd with his amusing anecdotes of farming and rugby, and shared his philosophy of working as hard as you can when you’re young in order to meet your goals and get ahead in life.

This event was made possible by numerous generous sponsors within the flooring industry.

Owen Wright, then president of the Canterbury JMA, was tragically killed in the February 2011 Canterbury earthquake. After helping many people traverse the hills to Lyttelton, Owen was almost within sight of his own home and family in Lyttelton when an aftershock hit and he was crushed by boulders.

This award is presented annually to a person who has made a significant contribution to the New Zealand joinery industry.

2014’s most promising joinery apprentices and kitchen design students were:

All winners in the various industry sectors are passionate about their trade and are well on their way to becoming industry leaders of the future. These events are valuable opportunities for employers and stakeholders to get together, and the BCITO looks forward to celebrating more high achievers’ skills and talents at the Registered Master Builders Carters 2014 Apprentice of the Year competition later in the year.

As one of the most successful educational institutions in the country, the BCITO is recognised for best practice training methods.

The BCITO is enthusiastic about the opportunities which come from having these related construction trades together within the coverage of one organisation. This collaboration gives all related trades a chance to learn from each other and work closer together.

A new Specialist Trades Group has been established and is headed by Greg Durkin, former chief executive of FloorNZ/DecorateNZ, to focus service to these trades.