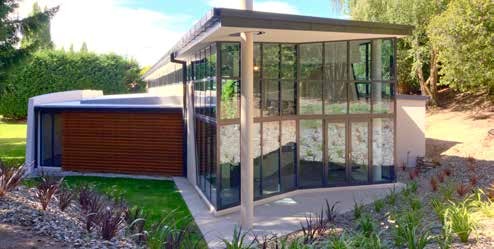 The final piece of the puzzle that is Stuart Landsborough’s Puzzling World was recently completed, with the creation of the stunning new Sculptillusion Gallery.

One of Wanaka’s biggest tourism attractions, the 40-year-old business has seen many additions and alterations over the years, but the most recent completes the visitor’s journey through a series of illusion spaces.

Led by Amalgamated Builders Queenstown region, the building’s construction team was category winner in the Tourism and Leisure and under $2 million commercial project at this year’s New Zealand Commercial Project Awards.

With a brief to create a new space that completed a circuit of illusion rooms while allowing space for a series of commissioned artworks, the design team of Sarah Scott Architects and engineer firm Spiire came up with a concept that used a grid of 60 degree equal angle triangles tying in with the form of the existing adjacent illusion space.

The centrepiece of the new 490 sq m illusion hall is a double-height green wall with clear storey glazing to maximise light. Four secondary exhibition spaces are also contained within the 3.5m-high zone.

Amalgamated Builders area manager Brett Squire says while the site — which is set in a hollow shaded by nearby Mt Iron — provided challenges, the project ranked amongst his favourites in 10 years with the company.

“It was a geometrically complex building, and much of the build occurred in the winter in the shadow of a mountain. This meant that aside from a very cold construction site, the ground froze, which affected the logic of the build and the way we continued,” Mr Squire says.

He says an open and collaborative approach between the project team and client meant any issues were quickly overcome.

“It’s great to think when you look at the Sculptillusion Gallery that we had a role in the creation of it. It’s a real showpiece, and we are immensely proud of the result.”

“We had much positive contribution from the contractors regarding illusion items outside of their scope, and often with a good sense of humour,” she says.

Roading authority restrictions required that no windows directly faced the road within 20m of the state highway. A further restriction was that any building form within this zone could not exceed 3.5m in height.

These requirements were met by stepping the building down at the point the 20m restriction zone commenced, and having curved planes presenting windowless faces to the road while allowing natural light in from the west.

The result is a series of curved forms that gently slope to create a sense of rhythm and movement along the busy road.

And with the Sculptillusion Gallery completed, Puzzling World is now set for another 40 years of inspiring and surprising visitors to the region.