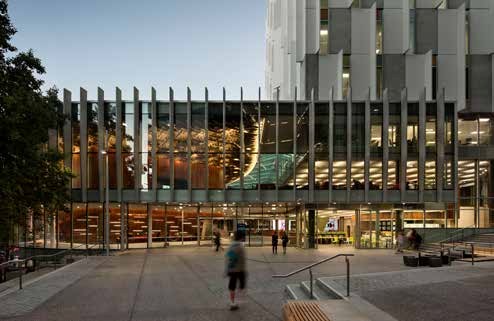 The revolutionary Sir Paul Reeves Building has not only connected the physical environment, but also provided new interactive social spaces at the Auckland University of Technology (AUT) city campus.

Opened in March 2013, the construction of the Sir Paul Reeves Building was undertaken by Fletcher Construction, winning this year’s National category for Education Project and silver in the New Zealand Commercial Project Awards.

With the brief demanding international class, highest quality standards, and the latest in innovation, technology and design, the building was always expected to be state-of-the-art.

The team was led by Andrew Rolfe of Fletcher Construction, and partners including engineers Beca, architects and designers Jasmax, and project managers from Hargrave Group.

The design included a 12-floor tower, a plaza, glass atrium and a green quad, with the added requirement to connect the four existing buildings.

This complex operation, described as being “one out of the box”, had its fair share of challenges. The site was located in the heart of Auckland city, surrounded by existing university buildings and with no onsite storage, and only a single loading bay off a very busy street.

“We had to do a fair amount of work in the existing buildings. In dollar terms, it was probably about $2.5 million. The other buildings still had to function 24/7 and we had to give students and staff access to and around our site the whole time,” Mr Rolfe says.

In addition to difficulties with the construction site there were also design challenges to contend with.

The concrete poured in the lecture theatre and tower all had a band-sawn finish, so getting the joints perfectly matched required numerous shop drawings, and achieving the right concrete mix meant plenty of sampling.

The curved baffle ceiling in the lecture theatre (representative of a skeletal structure of a ship) was complex due to its elevation and curvature.

The project team devised a panellising method, and a decision was made to make it off site. A CTC machine was used to create the panels and form the timber structure. All the timber used in this project was sourced locally.

The meticulous planning put in place for every stage of construction ensured minimal errors, which resulted in one of Mr Rolfe’s proudest moments.

“The architects only found 1400 defects which, at about three per space, is unheard of on a project of this scale. That quality performance is 10 times better than I have achieved on any other project. Defects cost time and money, so we put a plan in place to mitigate it, and we delivered.”

Mr Rolfe credited the smooth and steady development of the project to the communication and collaboration of his team, the client, consultants and subcontractors. AUT’s clear vision for the project helped motivate the team towards achieving the overarching goals.

The Sir Paul Reeves Building has truly brought the campus together in more ways than one.

“It is a massive focal point now and it is so widely used. People give it colour and movement, and it just looks so much better. Certainly a job I won’t forget in a hurry,” Mr Rolfe says.