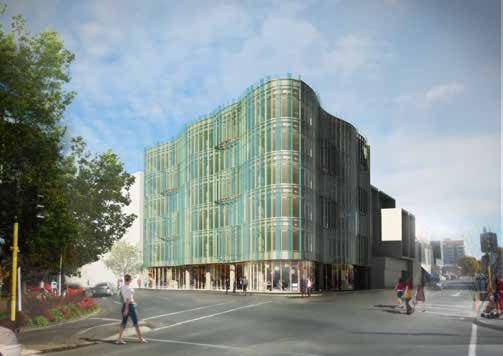 Even before Stephen Collins decided he was going to build in post-quakes Christchurch, he had selected steel for the structure of whatever was to be his next project.

“Why?” he asks. “Well, I knew about steel’s strength-to-weight ratio and its speed of erection. I also knew about the good performance of structural steel buildings in the Canterbury earthquakes.

“What mattered most to me about my next building was the safety of the people who would use it. I was determined that it would be aesthetically pleasing and thoroughly attractive, but first and foremost I wanted it to be very, very safe!”

His second criterion was the location. He attaches great importance to the value of where. For various reasons he’d decided it had to be outside the inner city zone and near the Avon River. From four possible sites he selected the one that would be opposite the new conference centre and between Gloucester Street and Cambridge Terrace.

His choice of architect began with Jasmax, a tenant in one of Mr Collins’ buildings. Jasmax chose Ken Powrie, just returned from overseas, to respond to Mr Collins’ brief.

“Ken’s concept satisfied all my requirements, so I quickly proceeded to select the team I could count on to deliver it,” Mr Collins says.

“Quin Henderson I’d known from his years with Hawkins Construction — he was now CEO of the new and exciting company Southbase Construction. Southbase would be the main contractor and Quin the team leader.

“Dr Grant Wilby, Aurecon technical director building (structural), was also well known to me, and I had every confidence in Aurecon as the engineering consultants. And Frank Van Schaijik, managing director of Christchurch’s John Jones Steel Ltd, is a long-standing personal friend.

“I believed that this team would ensure we extracted the greatest value by having everyone involved in developing the project right from the word go. And to keep us honest, I also engaged Ross Davison as quantity surveyor from Davis Langdon.”

Mr Collins’ predilection for steel was confirmed when Dr Wilby said his engineering design for the building would use base isolation. As Dr Wilby put it, “Base isolation is the most advanced seismic protection system available, and is used in hospitals, government buildings, bridges and other critical facilities all around the world. The base isolation system chosen for this project was Friction Pendulum bearings.”

By installing Friction Pendulum bearings between the structure and its foundation, EPS protected the structure from the ground shaking. Since earthquake-induced displacements occur primarily in the bearings, the lateral loads transmitted to the structure are greatly reduced.

EPS’s original Friction Pendulum bearing was designed as a Single Pendulum. Its single slider maintains the vertical load support at the centre of the structural member. EPS went on to develop the Triple Pendulum bearing, which incorporates three pendulums in one bearing, each with properties selected to optimise the structure’s response for different earthquake strengths and frequencies.

The Single Pendulum bearing maintains constant friction, lateral stiffness and dynamic period for all levels of earthquake motion and displacements.

For stronger Design Level Earthquakes, the bearing friction and the period increase, resulting in lower bearing displacements and lower structure base shears.

And for the strongest Maximum Credible Earthquakes, the bearing friction and the lateral stiffness increase, reducing the bearing displacement.

Properties of the Triple Pendulum bearing’s inner isolator are typically chosen to reduce the peak accelerations acting on the isolated structure and its contents during service level earthquakes.

This was the opinion that engineering consultants Aurecon gave Stephen Collins — base isolation technology would make the building very, very safe.

Architect Ken Powrie of Jasmax knew Mr Collins had been deeply saddened by the fatalities of the city’s quakes.

“He’d given us a very clear brief as to what he wanted 151 Cambridge Terrace to be,” Mr Powrie says. “It was one of Christchurch’s most prominent sites, but he wanted it to be something of a legacy, one that others might emulate to ensure that the city rebuild would reflect the people it was for and meet their need for aesthetic expression.

“He certainly didn’t want a concrete box. So we took inspiration from the curves of the Avon River, and these are echoed in the rippling facades of Cambridge Terrace and Gloucester Street, which convey a strong sense of movement.

“A centralised building core allows for an open floor plate, with unimpeded access to natural light and views to the outside. High ceilings optimise the light penetration and help maintain the visual connections to the river,” Mr Powrie says.

The structure of the building is shallow, founded in the gravels approximately four metres below ground level to minimise potential liquefaction.

“The superstructure consists of steel one-way Moment Resisting Frames (MRFs). Perimeter MRFs have been selected because bracing on the Cambridge Terrace and Gloucester Street facades would have been unacceptable, as the columns are set back from the facade.

“The perimeter MRFs provide good torsional resistance to the earthquake forces, which are transferred down to the ground floor slab. They also minimise the uplift forces acting on the bearings by virtue of their long length.

“The ground floor beams resist the moments in the columns so that only vertical and horizontal loads are transferred to the bearings. The lateral load resistance is provided by MRFs located around the perimeter of the building, with a pair of MRFs located in the core. The lateral loads transferred through the bearings are resisted by the cantilevered concrete columns in the basement.

“The bearings are triple friction pendulum bearings, manufactured by Earthquake Protection Systems (EPS) in the USA. Initial resistance to wind loads and small earthquakes is provided by friction within the bearings.

“Once the friction is overcome and the bearings start to slide, additional resistance is provided by gravity as the slider travels up the curved surface of the bearing. These bearings have a bearing inside a bearing, making them function in three stages.

“This is the first time they have been used in New Zealand,” Dr Wilby says.

They have the following characteristics:

“High uplift forces can, of course, be difficult to deal with, as the bearing may lift off. High uplift forces are often associated with short lateral load resisting systems, such as single bays of bracing, for instance. But MRFs have the advantage of being (usually) much longer, which reduces the uplift forces at the ends. The preference is to have a stiff superstructure to drive the bearings, but if this ideal is impossible, we can expect to see more MRFs used for base isolated buildings.”

The Comflor 80 steel decking used in the flooring did not require propping, and was supported on secondary steel beams connected with the perimeter frames and the frames located at the core.

Apart from the four core columns and the perimeter frame columns, each floor is column-free. The maximum floor span is 15.5m, and there is a 7m cantilever on the Gloucester Street/Cambridge Terrace corner. The roof is constructed from butynol on plywood, supported on steel purlins which, in turn, are supported by steel beams.

Dr Tim Maley also worked on the Aurecon design team led by Dr Wilby. “We did a Non-linear Response History Analysis (NRHA) which involves modelling the response of the structure to specific earthquake ground motions that have been recorded,” Dr Maley says.

“Our analysis used records from the CBDs of both Darfield (September 2010) and Lyttelton (February 2011). The analysis was carried out to verify the performance of the isolators under these conditions, with the records scaled to ULS (Ultimate Limit State) and MCE (Maximum Considered Earthquake) level events.”

It was also challenging for the engineers to design columns through multiple floor plans and having to work without the benefit of transfer beams. In the basement there was car parking, at ground level there were some retail outlets as well as more car parking and, above that, floors of office space.

Another challenge was the curved facades and the support structure to support the glass solar fins with fritting. John Jones Steel general manager Dave Anderson says the solution was to keep the glass in narrow straight strips, each held in support brackets that simply followed the curving steel ripples.

“JJS did all of the steel rigging and shared the fabrication and painting of the structural steelwork with D&H Steel of Auckland — some 640 tonnes in total,” Mr Anderson says.

“The basic structure was quite straightforward, but we did visit Earthquake Protection Systems in California to meet the team that produces the triple friction pendulum bearings used in base isolation.

“That was valuable because we needed to understand how we were going to get the seismic loads down from the superstructure through the suspended ground floor slab into the cantilevered concrete columns. When base isolation is used, the steel structure above ground level remains elastic rather than ductile — in effect, more cost-effective as the Moment Resisting Frame at the base of the building does not have to be heavy.

“The engineers at Aurecon told us the frame was designed at one sixth of what would be needed for the Maximum Considered Earthquake. So base isolation is a good solution for the future when we build larger buildings. Using the new technology, we don’t have to worry to the same extent about loads and displacements.

“In fact, base isolation reduces inter-storey drifts, and this had a significant benefit when we were detailing the cladding system and attachments for the curved facades. If we had used a conventional structure design, then the inter-storey drifts would have made the curved glass facades cost-prohibitive.”

Mr Collins, who sees himself as an investor rather than a developer, has the final word. “I lost a large part of my portfolio in the Canterbury earthquakes, but Christchurch is my home and has been good to me. I felt it was my responsibility to put something back.

“Regardless of the cost, it’s been worth it, and to have worked with a very special team, who have collaborated brilliantly to deliver a very special building, makes me proud.

“I am sure that, if I am able to drive past it in 10 years’ time, it will still make me proud, because it was built to be safe as it serves the community.”