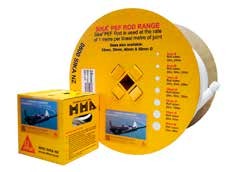 Sika has launched a high powered promotion for its long-established range of PEF Rods, with the prize being an aerobatic warbird experience in a genuine Curtiss P-40 Kittyhawk — an historic fighting aircraft of World War II.

Sika PEF rods are the white foam lengths placed in joints before a sealant is used. Rather than pump the joint full of sealant, a builder installs a PEF rod to control the depth of the joint so less sealant is needed.

The other advantage is that because the sealant won’t stick to the PEF rod, a two-sided seal is created — important because a seal can easily split if it is attached to three or more sides and then stretched.

Sika PEF rods won’t absorb water which can be a big advantage when sealing external joints.

“This aircraft is one of only 12 still in use in the world. It has a top speed of 579 km/h, so the winner is in for an amazing ride,” Mr Smith says.

The Curtiss P-40 was built as a World War II ground attack aircraft. It was renowned for its low level performance, rugged construction and six 50-calibre machine guns.

To enter the promotion, simply purchase any specially marked box or reel of Sika PEF Backing Rod before December 1, 2014.