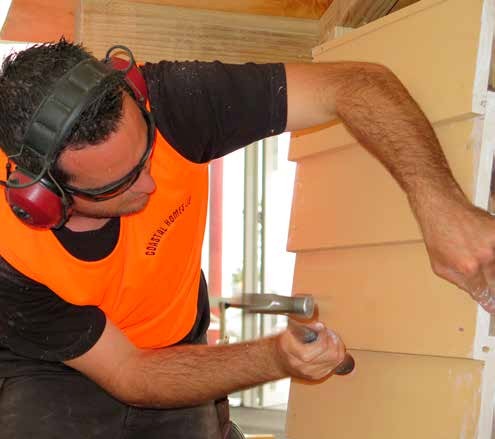 Kyran Vaniperen from Coastal Homes was “stoked” when his name was announced as the second winner in the Registered Master Builders Carters 2014 Apprentice of the Year.

The 25-year-old from Mangonui, who placed first in the Northland Region, says he was pleased with the result, particularly as he was one of the few apprentices in the competition who wasn’t qualified.

He says it was a workmate who had placed third in the national event a few years back, and his BCITO training advisor, who ultimately convinced him to enter the competition.

“The competition was such a valuable experience to be a part of — working with the pressure of the public and charities watching and the other apprentices competing next to you was definitely a learning curve,” he says.

“Being part of a competition like this is a real confidence boost. The positive encouragement from the judging panel and just the recognition of being among the best in the country is huge.”

The judges were impressed by Kyran’s passion and focus throughout the competition.

“Kyran impressed us with his passion and enthusiasm for his submitted project about which he spoke knowledgeably and cheerfully. He was very positive throughout his interview and spoke keenly about his love for his job,” they said.

“During the practical challenge we applauded Kyran’s intense focus and concentration. His ability to work well under pressure is something to be proud of.”

Kyran says he is working towards getting signed off and, one day, being as successful as his boss, Glen.

“We’ve got a project coming up which I’ll be running. It’s my first time running a project, so it will be another learning curve for me,” he says.

“In the future I hope to own my own company, and purchase my own home. I’ve got two little girls who want to be builders too!”

Kyran says the competition is an experience that all apprentices should get involved in.

“I’d encourage any apprentice to enter Apprentice of the Year. Don’t hold back — really go for it, you never know how you’re going to get on until you get there,” he says.

“I’d like to thank all the sponsors involved, and everyone who pulled the competition together. It was really well set up and was an awesome experience — I’ll never forget it,” he says.