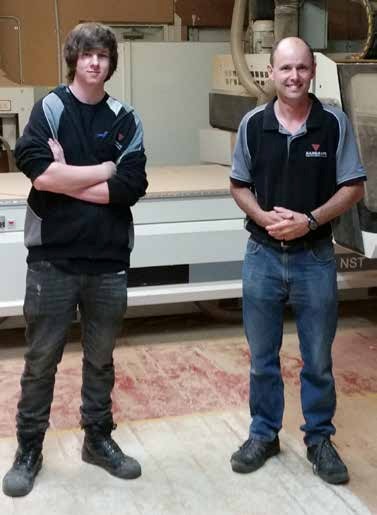 The BCITO has achieved another first for the construction industry by reaching 5000 apprentice sign-ups in 2014 — an all-time record. In fact, at the close of business for the 2014 year, that number had actually grown to 5542.

“This milestone reflects the huge commitment from the building and construction community, our apprentices and BCITO staff,” chief executive Ruma Karaitiana says.

“We look forward to working with the industry to maintain momentum over the coming years to ensure we meet the skill requirements of New Zealand’s construction sector. We’re literally building people like never before.”

Trevor Mackie of Christchurch was delighted to be number 5000. Trevor works for joinery business R A Hale 1997 Ltd, and is lucky enough to really enjoy what he does every day. He’s looking forward to his future in the industry, and can’t wait to become a qualified joiner.

Trevor began working for R A Hale when he heard about the opportunity through his school, Hagley Community College, and went for it. Three months later, and recognised as a dedicated and attentive worker, Trevor was signed into a joinery apprenticeship.

Managing director Donald Bisphan is pleased with Trevor’s progress. “He’s a really great member of the team, a good all-rounder, and we’re looking forward to teaching and mentoring him further.”

“I’ve always enjoyed working hands-on creating something and working out complicated and intricate details of a project from start to finish. Joinery lets me do both,” Trevor says.

“The best thing about being an apprentice is learning something new every day and finding out better ways of doing things that you might not have known beforehand.”

In his spare time, Trevor is a keen BMX racer, and was ranked number nine in New Zealand at age 16. He also competed in the BMX World Championships in Auckland in 2013.

To win a BMX race you need to be in front going into the first turn and accelerate the fastest. The leader controls the race and the followers need to work harder. Trevor will no doubt take the lead in his joinery career just as he has in his racing career.

His BCITO training advisor will guide Mr Bisphan and Trevor through the apprenticeship programme over the next few years. The BCITO wishes him the best for his learning journey.

Having exceeded all forecasts for apprentice numbers during 2014, the BCITO is committed to ensuring there are enough skilled professionals across all trades to cope with demand in the future.

If you’re an employer keen to take on a new apprentice, contact the BCITO on 0800 4 BCITO (0800 422 486). The organisation has a dedicated job matching service and a database of many people who are interested in starting an apprenticeship in the construction industry.