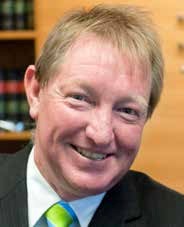 Overhauling the Resource Management Act (RMA) is critical to addressing housing supply and affordability, and maintaining the momentum of economic and job growth, as well as better managing New Zealand’s environment.

“This 10-metre mountain of red tape is holding back the development of new houses and jobs, and it is not performing well enough in managing key resources like fresh water,” Dr Smith says.

“The Government is planning the most significant overhaul of the Act since its inception 25 years ago. We want to modernise the purpose to make it more practical and relevant, standardise council plans and simplify the process for gaining consents.”

Dr Smith also recently released an independent report by Motu Economic and Public Policy Research — commissioned by the Treasury and the Ministry of Business, Innovation and Employment — into the impacts of planning rules, regulations, uncertainty and delay in residential property development.

“This report is consistent with the conclusions of the Productivity Commission and the Organisation for Economic Co-operation and Development in highlighting the high administrative burden of our system of environmental regulations, but also adds new information by estimating the actual cost of its flaws,” Dr Smith says.

“It indicates that over the past decade, the RMA has added $30 billion to the cost of building, and reduced new housing stock by 40,000 homes.”

Dr Smith also cites practical examples of where the RMA had wasted health and education funding, and where councils were using the RMA to unnecessarily interfere in people’s lives.

“Our first phase of RMA reforms has made a positive difference in getting consents processed more quickly, including for major projects like the Waterview Connection in Auckland, but we have always made plain more substantive change was required.”

Dr Smith outlined 10 major changes the Government would be including in its second phase of reforms in 2015:

“We have a power of work ahead to do with officials, our support parties and Cabinet committees to finalise and draft the required Bill. Our ambition is to have the Bill before Parliament and through a full select committee process this year,” Dr Smith says.

“These reforms will be pragmatic and moderate. We want to reduce the mountain of plans and rules that make the RMA a barrier to new housing and jobs, but retain the core environmental controls that ensure we keep New Zealand special and such a great place to live.”

Government figures indicating that environmental red tape is adding $15,000 to the cost of a new home is “just the half of it”, according to group home builder Generation Homes chief executive Kevin Atkinson.

“Behind the smoke and mirrors the reality is that the indirect cost of low productivity is a key issue in New Zealand’s building industry,” Mr Atkinson says.

“Time is money, and in my opinion the quoted figure of $15,000 could almost be doubled by the time productivity is chewed up in working through complicated consenting processes — which, in turn, impacts on the ability of the industry to build more houses.”

Mr Atkinson says the Government’s ambitious plans to overhaul the Resource Management Act, designed to reverse skyrocketing house prices throughout the country, is a welcome one.

“However, the proof will be in the pudding. The Minister is right in that the consenting process adds to the cost of the house, not to mention time delays. If the Government’s reforms are implemented and actually successful the changes could be quite significant. But they are not a silver bullet.”

Land availability is also key and, if addressed, will lead to increased affordability, Mr Atkinson says.

“From our personal experience it can take up to six years for land to be ready, from the concept stage through to supplying the market. Time is wasted in the repetitive work of going back to the council with revision after revision.”

Under the proposed reforms, councils would be required by law to free up land for development in line with projections for future population growth.
Mr Atkinson says standardising the consent process nationwide would be a large step forward for the industry.

“We find that there is a huge difference between councils, and a lot of local authorities are trying to adopt a more proactive and supportive approach.”

Generation Homes is working closely with the Auckland Council to determine if the company can introduce five-day consents in West Auckland and Manukau, in line with arrangements already in place in Hamilton.

“If implemented, we can avoid delays and provide certainty for contractors. The benefits will ultimately flow down to customers due to a faster build time.”