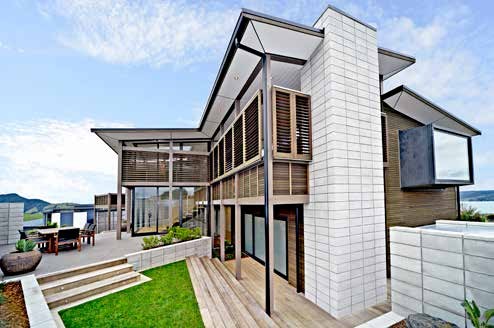 Richard Warwick of HAMR Home Building Contractors was “overwhelmed” when his name was read out as the winner of the Nulook New Homes $600,000 – $1 million award at the Registered Master Builders 2014 House of the Year.

He says this is only his second year competing in House of the Year, so winning an award was a great accomplishment for him and his team.

“Personally, it was a fantastic achievement because this was a really challenging build. The tight site and the 30° angle of the house posed a range of challenges — hours and hours of labour went into this build.”

Mr Warwick says there was a huge amount of detail in this house, and the clever use of materials gave the home the X-factor.

“This house is stunning. Extensive use of raw materials joining with glass, timber and laminated timber, as well as cedar shutters and louvres, really made this house stand out from others in the category,” he says.

The judges called this a carefully positioned and stunning architecturally-designed cedar and concrete block home.

“Taking a dominating position on top of Centennial Hill in Auckland, the home is carefully positioned between the established surrounding homes to allow views from almost every top floor room,” they said.

“Living spaces surround three sides of the home, and a roofed indoor/outdoor living room has a clever complex of cedar shutters and fixed louvre screens. This extends the indoor living spaces, giving a feeling of openness, whilst providing privacy from the close neighbours.

“The builder has certainly been challenged with this project, and he has proven equal to the challenge, providing a fine example of a high degree of workmanship.”

Mr Warwick says the benefits of House of the Year and being a Registered Master Builder are endless.

“I’ve been a Master Builder for three years, after starting our business five years ago — and we like being part of a recognised organisation,” he says.

“Winning a House of the Year award is really rewarding for the whole team, and you become that little bit more special when competing against other builders. We will absolutely be continuing to enter House of the Year!”