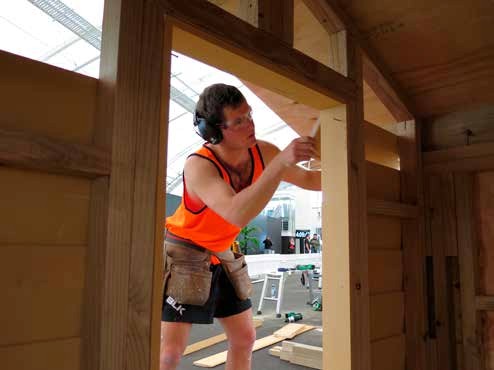 New Zealand carpentry apprentices are being urged to show off their skills and talent in the Registered Master Builders Carters 2015 Apprentice of the Year following a good increase in entries in 2014.

Entries for the competition are now open, with a share of more than $100,000 in prizes up for grabs, as well as the coveted title of 2015 Apprentice of the Year.

Registered Master Builders chief executive David Kelly says the competition is an excellent opportunity to showcase the calibre of apprentices in the carpentry industry.

“Apprentice of the Year is a great opportunity for apprentices. Taking part and perhaps winning a place in the competition really does set them up for rewarding careers, and it is a great way for them to meet others in the industry,” he says.

“With a record number of apprentices signing up to the Building and Construction Industry Training Organisation (BCITO) last year and an upswing of competition entries, we’re anticipating higher numbers again and some strong contenders for the title of Apprentice of the Year.”

2014 winner Tom Southen says taking part in Apprentice of the Year has helped him to plan out his future, and was a fantastic chance to meet other apprentices at a similar stage in their career along the way.

“Entering the competition gave me the opportunity to see how I ranked against my peers,” he says.

“My advice to other apprentices starting off is to jump on every opportunity you’re offered. The competition is a great opportunity to test yourself and learn about your ability to cope under pressure.”

Principal sponsor Carters will be supporting the competition for the eleventh year running.

“The Apprentice of the Year competition is considered a key component of our investment in learning,” Carters chief executive Mike Guy says.

“Training and mentorship of new talent is fundamental to the future of the industry as a whole.

“While looking after new people entering the industry is a crucial element of our partnership to educate and train, we follow a lifecycle approach,” Mr Guy says.

“This means that throughout their career, apprentices can look forward to a continuous engagement with learning, via our education programme, as a constant component of interacting with our company,” he says.

“The competition is a fantastic opportunity to generate recognition which can set them up for the rest of their career. Getting your name out there is invaluable for an apprentice starting out in the workforce.”

Carpentry apprentices can enter the competition online at

Apprentices, employers and young people aspiring to be part of the construction industry are also encouraged to join the Facebook page at www.facebook.com/apprenticeoftheyear.

The Registered Master Builders Apprentice of the Year competition is made possible thanks to principal sponsor Carters, the Building and Construction Industry Training Organisation (BCITO), and supporting sponsor the Ministry of Business, Innovation and Employment (MBIE).