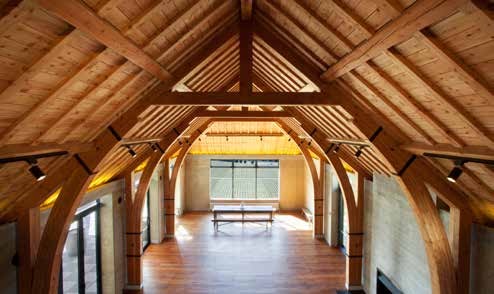 “Team performance and the spirit of the team underlies everything we do, and transcends across our four regional branches — Queenstown, Invercargill, Dunedin and Christchurch,” area manager Brett Squire says.

“It is about the enthusiasm we show as a team that extends out to the broader project team — the architects, the engineers — and to the client. It’s no great secret, but it is the foundation of everything we do.”

And awards are something ABL knows a lot about. This month, the company — that has won five national titles in the New Zealand Commercial Project Awards — received a once-in-a-lifetime Platinum Award from the Registered Master Builders Association (owners of the national awards) for its “outstanding excellence in the commercial construction sector”.

The accolade is only given to an organisation that has received five or more national titles.

“We’re extremely proud and humbled to receive the Platinum award. We’re not the type of people that often pat each other on the back, so it’s really great to have this recognition,” he says.

Alongside the building award, Queenstown’s luxury Sofitel Hotel has won a plethora of accolades in the past, from the World’s Best Hotel Spa to Best New Zealand Hotel.

Rooms and suites greet guests with five-star design, sophisticated and refined aesthetics, luxurious materials and sensory indulgences, including the divine comfort of a Sofitel MyBed and the extravagance of a double spa bath in every room.

In 2013, Rippon Hall was praised by judges as a building with a “truly timeless quality” that realised the owners’ vision “magnificently”. Built largely from rammed earth from the site and larch timberwork also milled on site, the Hall works in harmony with the natural environment.

Wanaka’s Puzzling World Sculptillusion Gallery invites visitors to wander around the various larger-than-life exhibits that showcase visual trickery at its best. From living walls, wave ceilings, stone carpet and hanging waterfalls, the visitor is met with stunning ideas that, when coupled with building over one of the coldest winters on record, made the project a complex undertaking for all concerned.

“While these three projects are ones that we’re particularly proud of, we feel proud to work on every project we do, whether it’s an international hotel like the Sofitel, or a concrete plant,” Mr Squire says.

“Every project matters and every client matters. We love what we do. That’s why our clients return.”