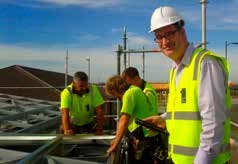 Technology is increasingly seen as one of the fastest growing ways to increase productivity in New Zealand’s construction industry, and a leading solution in New Zealand and globally is BuilderTrend.

The cloud software connects clients, project managers, builders, subbies and anyone else who needs to know what is going on with a job, all in real time, and it integrates with Xero and Quickbooks.

The software is accessible from any smart device or computer, which means everyone is up to speed at any time, and there is less need to invest in additional hardware.

However, are Kiwi builders using such systems to their advantage?

In 2010, the New Zealand Building and Construction Productivity Partnership, a collaboration of industry and Government, was established to address low productivity in construction.

The New Zealand Institute of Economic Research (NZIER) researched industry innovations builders thought should be focused on, and identified “project management is complex and underdone. Co-ordinating house builds is very complex but, generally, builders do not put enough effort into it, maybe because the value proposition is not apparent.”

High levels of subcontracting made it difficult to identify the true size of construction companies.

“At times when there are 20 to 25 different trades working on a house simultaneously, productivity is highly dependent on good co-ordination and strong project management,” the report said.

With the advent of cloud software, large construction companies don’t have to be the only ones tapping into technology to increase productivity and streamline the build process.

However, the NZIER report identified that “in principle, industry structure and networks should facilitate innovation — they can also hinder diffusion of some technology”.

This could explain why the industry has been slow to adopt information technology.

A large number of people need to be on board with the technology before any useful value is perceived by individual tradespeople.

“For instance, emailing has helped subcontractors hugely, but there was little individual incentive to move to email until everyone else did,” the NZIER report says.

The same behaviour may apply to adoption of project management systems that rely on cloud technology.

BuilderTrend makes it feasible to efficiently manage a large number of jobs at one time, without the construction team spending its day on the phone or writing notes in diaries to follow up later.

The post-earthquake building boom in Christchurch and the housing shortage in Auckland have put the pressure on builders to make homes quickly and cost-effectively.

No 1 Homes director, Dan Turner, has a lifetime of construction industry experience, starting out as an apprentice in the 1980s, and he knows the daily challenges on a building site.

“No 1 Homes started using BuilderTrend early in 2014, aiming to make housing more affordable without compromising quality,” Mr Turner says.
“I had also used other BIM (Building Information Modelling) systems, but when I saw BuilderTrend I thought it was a really positive step, and the platform was ideal for residential builders.”

Mr Turner needed the software to provide efficient job management and communication between contractors, subcontractors and home owners.
“BuilderTrend is an essential tool in our business because it increases productivity and reduces downtime.”

In March, Mr Turner was managing 24 projects with BuilderTrend, and was anticipating more large contracts that would add to the workload.
“In the past, we would text contractors, and then we progressed to emails when everyone had smart phones.

“Now, if we have a problem or query onsite, we can photograph it, use voice to text for comments and make the information available immediately. Decisions can be made within minutes, not hours.

“It can be added to a ‘to do’ list, multiple people can access the same document from their smart device, and the contractor can take action without spending time phoning numerous individuals.”

Some elements of jobs involve multiple tradespeople, and when instructions are entered into the system once, everyone concerned is notified and the resolution is communicated to all parties.

The manager of the BuilderTrend account can restrict levels of access to complete projects, as well as specific elements within projects.
Reports identify any conflicts within the schedule — for example, where one contractor has been allocated to two jobs at the same time.

The home owner can also follow building progress and add queries that all approved contractors can see and respond to.

Being cloud-based means records are secure, and information will not disappear if someone loses their phone or their computer crashes.

The software does need a little bit of training but Mr Turner sees it as very user-friendly. And when he has contacted the United States-based help desk he was quickly assisted.

Australasian regional manager for BuilderTrend, Trudy Atherton, saw its potential to assist the teams involved in the Christchurch rebuild.
The record-keeping system is also useful for protecting builders with the increased requirements for Licensed Building Practitioners.

“Although BuilderTrend was founded nine years ago, when we introduced it to New Zealand in 2012, systems like this were relatively unknown,” Ms Atherton says.

“The evolution of Xero has seen a boom of cloud systems develop that seamlessly integrate accounting software with productivity software, which creates greater efficiencies,” she says.

BuilderTrend was approved as a Xero add-on in December 2014, and has seen a rapid uptake since its release.