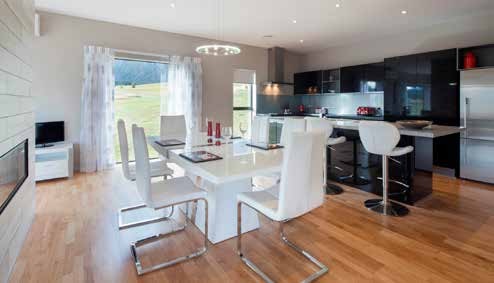 The show home opened at the popular Jack’s Point lifestyle development recently, and displays many features of sustainable living and environmentally-responsible building methods.

Designed by Rilean-appointed architect Mark Gray, the four-bedroom, two-bathroom home at 9 McKellar Drive spans 225sq m, and is located in a sunny north-west facing position within the spectacular development, overlooked by The Remarkables mountain range.

The Evolution Series team is thrilled to re-open the home to the public, which first opened its doors in June 2014, enabling them to once again showcase what an energy-efficient home should look and feel like.

“We’re lucky the owners have allowed us to use it as a show home again for six months while they live overseas,” Rilean Construction director and shareholder Mick Moffatt says.

“It’s perfect timing really, as we’re now in winter and starting to feel the occasional morning frost. Even in our harsh Central Otago climate, stepping into this warm, sunny home really encapsulates what an evolution home is all about. The heat retention level is amazing.

“An energy-efficient home passively creates and retains warmth, reducing the need for other forms of heating.”

Mr Moffatt says buyers and potential buyers were increasingly keen on building sustainable homes, not only for environmental but financial reasons.

The recent Queenstown Home Show resulted in two new contracts and numerous enquiries, as the Evolution Series concept continues to grow.
“Since 2011 we’ve built 17 homes, and we currently have 13 more at the design stage or in the process of being built,” he says.

“To put that into context, we only built two homes in our first year when the concept was new to Queenstown, but since then growth has been spectacular, as people have come to realise the savings they can make while being kind to the environment.

“People have a genuine desire to learn more about their options for sustainable living, to be warmer and healthier, while at the same time knowing they have a great-value investment which will help save money in the long run.”

All evolution homes are monitored for energy efficiency post-construction, and all are performing better than expected.

“One home’s using approximately $1200 per year for electricity, including heating and hot water, which is incredibly good for this area,” Mr Moffatt says.

Rilean pioneered sustainable and energy-efficient home building when it launched the evolution series in late 2010, and it continues to exceed expectations.

Jack’s Point is proving a popular choice for energy-efficient home owners, with four being built or underway in the next six months.

Also in progress are homes in Moeraki and Wanaka, with Wanaka welcoming an additional nine cottage-style Evolution Series homes at the Kirimoko Park development.