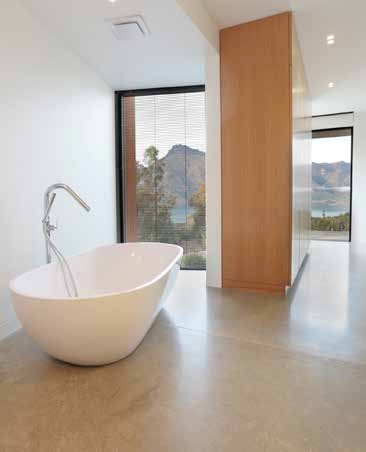 It was an outstanding moment for Trevor Ward from Trevor Ward Builders when his name was read out as the winner of the Plumbing World Bathroom Excellence Award at the Registered Master Builders 2014 House of the Year.

He says it’s always good to have your hard work recognised, and it was a real pat on the back for the whole team.

“A bathroom isn’t just about the build,” Mr Ward says. “It’s about the tilers, plumbers, glass fitters and, of course, the designers. There was a fairly large team involved in this build, and they all deserved the recognition.

“Winning the Bathroom Excellence Award definitely did some good to our profile. The houses we work on are usually very high-end, and the people designing the homes like to know that the quality of work will be achieved.”

Mr Ward says the “trendy” design of the bathroom was what made it really stand out, and the architects deserved a lot of recognition.

“There’s a stand-alone bath with a window at the end that looks out to Lake Wakatipu — it’s quite outstanding,” he says.

“The shower has a glass wall that looks straight through the bedroom and out to the lake as well.”

Judges were impressed by the “meticulously finished” bathroom in the Queenstown home.

“This is a bathroom fit for a king in a superb location,” they said.

“This exceptional master ensuite has been masterfully designed, and the builder has produced a bathroom of outstanding quality.

“The bathing area is set slightly aside from the main functional area of the bathroom, and is set in an angular shaped section of the room, which incorporates a floor-to-ceiling window, allowing vistas of Lake Wakatipu whilst bathing.”

Mr Ward says the main advantage of taking part in House of the Year is the recognition his business gained.

“It’s great to be able to show people you’re capable of turning out a good product, especially amongst the architects,” he says.

“It’s also a fantastic experience for our subcontractors — they all got a really good buzz out of winning.”

Mr Ward joined Registered Master Builders for its back-up system and the Master Build Guarantees. “It’s great for promoting our business. On top of that, the awards are good for anyone in the construction sector,” he says.