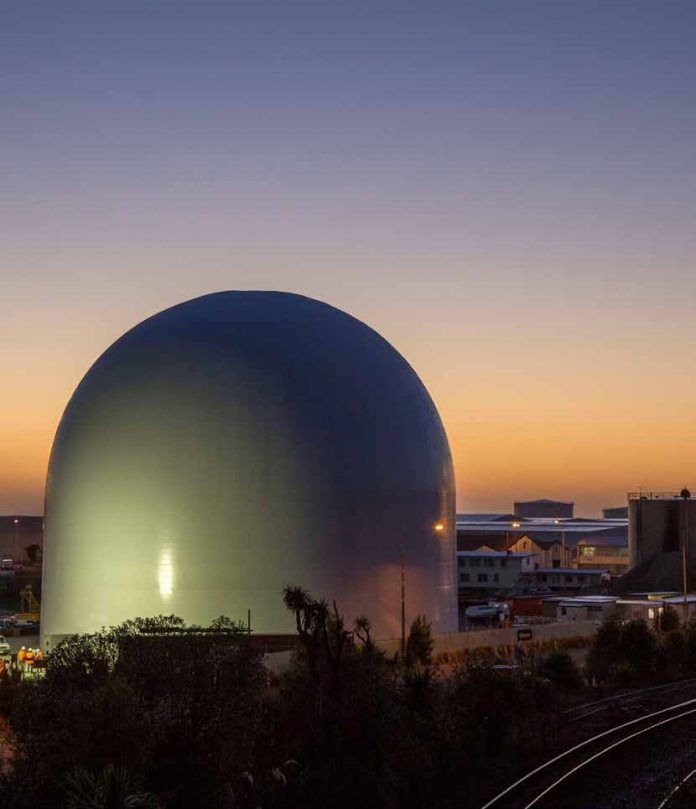 In October last year the ceremonial groundbreaking took place at the Port of Timaru for Holcim New Zealand’s new $50 million cement import terminal. The site had been fully cleared of old silos and was then ready for construction.

The entire terminal consists of two berthing facilities, shore-based ship unloading capacity, a cement truck load-out facility, ancillary buildings, and a cement storage dome with a 30,000 tonne capacity. For the local citizenry, principle interest has been centred in the rise of the 36m diameter, 35m tall dome that accounts for half the cost.

It is already a prominent feature of the Timaru landscape, and has become known as “The Dome”, with those initial capitals now part of the local lexicon. While storage domes are in common use throughout the world, Holcim’s Timaru dome is a first for New Zealand.

The design and construction have been undertaken by Domtec International, a US-based contractor with 20 years’ experience. Initial work was concentrated on ground improvements to the Timaru soil to meet the geotechnical requirements of the continuous circular ring beam foundation on which the dome proper stands.

Readers can rest assured the Christchurch earthquakes were uppermost in both Holcim’s and Domtec’s minds. Following completion of the ring beam, all the steel reinforcement needed for erection of the dome was placed inside the footprint along with the necessary machinery.

The customfabricated dome skin exterior membrane was then attached to the ring beam. Once everyone was happy, inflator fans were connected to inflation ducts, and the internal pressure slowly increased. It took just over an hour for the dome to gain its final shape.

This occurred in late February this year. When full inflation was complete, internal construction began by spraying a layer of polyurethane foam over the Dome’s inner skin. This not only provided initial rigidity but also served as the essential insulated thermal barrier.

Some 450 tonnes of permanent steel structural rebar were then erected around the inside perimeter, followed by layer upon layer of sprayed shotcrete to complete the basic structure. Insertions were then cut into the completed structure to allow installation of equipment such as dust collectors.

Domes typically take three months to construct. Those used to hold cement are fitted out with a fully aerated floor to fluidise the cement for ease of flow, and to ensure the dome can be fully emptied. Cement from the ships is unloaded by a pneumatic suction arm and transported pneumatically to the dome.

The Timaru terminal is on track to be fully operational in the first quarter of 2016. Those wanting to know more can check out the dome international web site at www.domtec.com, or you can view the dome construction process at www.youtube.com/watch?v=j2pf7xNOvhA&x-ytts=1422579428&x-yt-cl=85114404 Most in South Canterbury view the dome with interest, verging on fascination, and see it as a sign of the growing importance of the Port of Timaru to the South Island.

However, there are those somewhat less enchanted. These include residents whose homes are in line of view. Some have been rather vocal following inflation. Nevertheless, The Dome is surely more easy on the eye than the line of rusty, aging silos it replaced.

At the time of that transitory brouhaha, one Auckland reporter found time to check out the Timaru venture. They were then able to assure New Zealand Herald readers that they too were about to receive an “eyesore” when Holcim erected a dome in their neck of the woods.

Aucklanders will not have long to wait. Work has commenced on the northern structure, with the intention of having it operating in the third quarter of 2016.