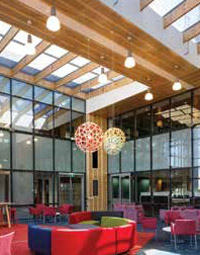 The Waiheke Island Community Library, which judges described as “a lyrical response to a timber library building, and a robust structural yet visually appealing statement,” has won the Resene Overall Supreme Award at the NZ Wood-Resene Timber Design Awards.

The judges said the extensive use of sculptured timber battens on the facades give the illusion of movement both within the building and as visitors move around it, and close collaboration with Waiheke artist Kazu Nakagawa ensured the finished facility is as much “art” as community resource.

A record number of entries was received for the Awards, according to Wood Processors and Manufacturers Association (WPMA) promotions manager and awards organiser Debbie Fergie.

Winners were announced at a gala function in Auckland in September.

“Timber is a renewable resource providing whole-of-life credibility,” she says. “There are now so many exciting ways it’s being used — it’s visually inspiring and can be incredibly strong and flexible at the same time.”

Innovative uses of plywood were explored in entries across the competition, with the Exterior Innovation and Infrastructure category won by an architectural research project by Mark Southcombe of Southcombe Architects.

Trees were used as inspiration for shading and decorative panels in two Auckland Council library entries. The Waiheke Island Community Library won the Commercial Architectural Excellence category, with the Devonport Library as joint runner-up. Both make extensive use of glulam and other engineered timber.

The design inspiration for the Waiheke Library was taken from the grove of large pohutukawa trees on the site, with the library’s interior giving the illusion of sitting under a pohutukawa forest.

This was achieved with perforated ceiling panels referencing its leaves, and engineered timber trusses the branches. The large roof canopy is further supported on “tree trunks” of shaved poles, and interior screens repeat the leaf patterns.

Modern library pavilion and park setting concepts were referenced for the Devonport design, complementing the marine and historical aspects of the suburb. The double height veranda is a glulam portal frame above which is timber “fretwork” solar screening. It was placed in the international Public Library of the Year Award in August.

In the Novel Application of Timber Award, the winning Beach Barn in New Brighton used a number of wood-based materials along with modern structural systems to provide “a healthy and energy efficient indoor environment . . . (that is) available to the public at realistic prices,” according to the judges.

Plywood was also used successfully in the Residential Architectural Excellence category, although the winning Maiatutu Road Residence in Pongakawa used Victorian ash flooring, walnut cabinetry and Fijian kauri jambs and architraves to create “a truly excellent example of architecture . . . conceived, detailed and constructed (to showcase) the versatility of timber,” the judges said.

In the new category of Engineering Innovation, joint winners Wynn Williams House and Trimble Navigation offices are both Christchurch entries. The case for timber buildings in Canterbury is particularly strong, since at approximately 50% of the total mass of concrete and steel for equivalent strength they provide especially compelling arguments for building on unstable or friable soils.

The Trimble Navigation office building used post-tensioned timber frames and walls. By using replaceable energy dissipaters, connectors, rivets and screws the building is designed to return to its correct alignment following any seismic event, and any damage sustained as a result can be easily checked and elements replaced.

“This sets a benchmark for timber seismic design,” the judges said.

Wynn Williams House used post-tensioned timber as well as concrete for framing, and included lead-rubber base isolator bearings to produce what judges agreed was an excellent example of composite engineering.

“Exposing the post-tensioning . . . on the facades of the building is a practical and symbolic feature,” they said.

As well as winning here, it gained a Merit Award in the Property Council of NZ Awards, and is shortlisted at the World Architecture Festival to be held in Singapore later this year.

Damage-avoidance design skills employed on the NMIT building, which used world-first pres-lam technology developed at the University of Canterbury, were refined into Generation 3 and 4 buildings to further simplify construction techniques and improve seismic performance.

“Not only . . . (are) these buildings made from engineered wood products, but wood products are an integral part of the linings and finishes,” the judges noted.

The Timber Design Awards are now in their 40th year, and showcase wood’s ability to complement architectural design and provide structural integrity to residential, commercial and public properties.